You are here: Home › News › New Component Of Bone Identified
By Will Parker on July 19, 2005 in News 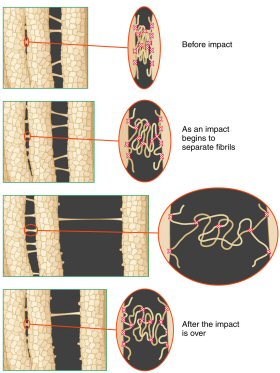 Scientists at the University of California, Santa Barbara (UCSB) have made an intriguing discovery to do with the properties of human bone. The scientists describe their results, published in Nature Materials, as like finding a sort of “glue” in human bone. It describes how young healthy bone resists fracture and how getting older increases the chance of bone fractures at the molecular level.

Professor Paul K. Hansma, in collaboration with Professors Daniel E. Morse and Galen D. Stucky, spent several years tracking down where the glue was located in bone, and how it worked. The glue appears to contain “springs” that uncoil when the bone is stressed, helping the bone to absorb shock. When the stress is relaxed, they coil back to their original structure.

Hansma and his colleagues at UCSB have pioneered the use of the Atomic Force Microscope in looking at the nano-scale level of biological materials – down to a billionth of a meter. This technology has made it possible to see for the first time the highest resolution images of bone ever obtained, which reveal the location of the adhesive or “glue” that holds together mineralized collagen fibrils (protein fibers) of bone.

Hansma said that despite a paper on bone being published every six minutes, scientists have only had a partial understanding of bone structure. “This is a fundamental and new discovery in an old and well-studied field. Before this research, it was well known that the mechanical properties of bone depended on mineral particles and on collagen fibrils. The picture of bone was that it consisted of these collagen fibrils coated with tiny mineral crystals only a few atoms thick. What we found is that there is a glue in bone that holds these mineralized collagen fibrils together, and this glue works along the same principles that our interdisciplinary research group found in abalone shells. This glue involves sacrificial bonds (with hidden length) that uncoil when the bone is stressed,” Hansma added.

“The possible implications for human health are important,” explained Georg E. Fantner, a UCSB doctoral student in physics and first author of the report. “The findings may lead to therapy for bone fracture, or even to prevention,” he said. He noted that these mechanisms give young healthy bone its tremendous resiliency and resistance to fracture, and actually help heal small micro cracks soon after they’re formed.

“We’re especially interested in learning how these molecules change and become depleted with age as well as in certain diseases,” said Morse. “A potential benefit from these discoveries is the prospect that we might now learn how to protect bone from these deleterious changes, and perhaps actually reverse some of the changes. Less than one-third of elderly women who have a hip fracture return to previous function and more women die within a year of hip fracture than die after a heart attack,” Morse concluded.