You are here: Home › News › Soy Protein Prevents Skin Tumors
By Will Parker on October 16, 2001 in News 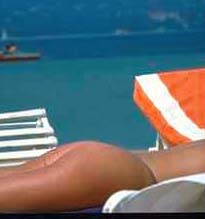 New research at the University of California, Berkeley, may add yet another boost to the healthy reputation of the humble soybean. A study published Oct. 15 in the journal Cancer Research shows that mice with the soy protein lunasin applied to their skin had significantly lower rates of skin cancer than mice without the lunasin treatment. More than two years ago, the same UC Berkeley researchers discovered that injecting the lunasin gene into cancer cells in a culture stopped cell division. In their latest work, they tested whether the lunasin protein could prevent normal cells from becoming cancerous in both cell cultures and in mice.

In the study, varying doses of lunasin were applied to groups of mice over a period of 19 weeks. They were compared with a control group that had received no lunasin treatments. After the mice were exposed to chemical carcinogens, the group that had received the highest lunasin dose of 125 micrograms twice a week had a 70 percent lower incidence of tumors than the control group.

“In the high dose group, some mice did develop some tumors, but there were fewer tumors per mouse and there was a two-week delay in their appearance compared with the control group,” said Ben O. de Lumen, nutritional sciences professor in UC Berkeley’s College of Natural Resources and principal investigator of the study.

De Lumen is a member of UC Berkeley’s Health Sciences Initiative, a partnership among biomedical sciences and technology programs geared towards advancing research into today’s major health problems. He heads the lab where lunasin’s anti-cancer properties were first discovered, and where Alfredo Galvez, lead author of the study, worked as a post-doc researcher. Other authors of the report include Na Chen, a doctoral student, and Janet Macasieb, an undergraduate student, both from the Division of Nutritional Sciences and Toxicology at UC Berkeley.

The researchers got clues on how lunasin works through tests in cell cultures. They showed that lunasin binds to deacetylated histones, a specific form of protein in a cell that helps package the long strands of DNA into tight coils. Lunasin seems to target cells before these histones undergo acetylation, a crucial step recently linked to cell proliferation and the formation of cancer.

In one of the tests, the cells from a lunasin culture showed an 80 percent lower incidence of transformation into cancer cells compared with non-lunasin cultures after exposure to carcinogens.

“The chemical changes that occur in normal cells before and during cancer formation signal lunasin,” said de Lumen. “We believe lunasin is like a watchdog; it’s out there sniffing. When it sees a normal cell transforming, it gets in there and attacks the cell.”

Studies on the health effects of soy products have been building over the years. Epidemiological studies in Japan and China, where soy-rich diets are common, show people in those regions have significantly lower rates of certain cancers and heart disease than people in Western countries, where typical diets contain little to no soy.

Much of the spotlight has focused on isoflavones, a soy phytoestrogen that acts like a weak form of the hormone estrogen, and the Bowman-Birk protease inhibitor (BBI), another soy component with potential anti-cancer properties.

Galvez, who has since co-founded a biotech company in Fairfield, Calif., said lunasin stands out among the other soy agents because of its unique mechanism of action. “It’s based on chromatin modification, which now a lot of cancer researchers are investigating,” he said.

Still, many promising anti-cancer agents never make it from the lab onto drugstore shelves, and research into lunasin is still in its infancy, said de Lumen. But he said this study suggests interesting directions for future studies and applications of lunasin.

“The key for developing a product into oral medicine is the bioavailability of the compound,” said de Lumen. “How much of it is absorbed, and how much ends up in the tissue? For lunasin, we don’t know the answer, yet. But the obvious application of this result is that we could formulate a lunasin product that could be applied to the skin. It could maybe be applied in a sunscreen.”