You are here: Home › News › New hypothesis links smallpox vaccination and HIV
By Will Parker on May 18, 2010 in News 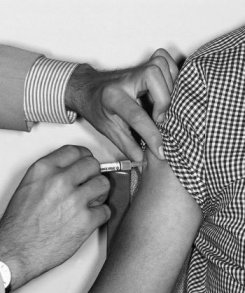 They found significantly lower viral replication in blood cells from vaccinated individuals. “There have been several proposed explanations for the rapid spread of HIV in Africa, including wars, the reuse of unsterilized needles and the contamination of early batches of polio vaccine. However, all of these have been either disproved or do not sufficiently explain the behavior of the HIV pandemic. Our finding that prior immunization with vaccinia virus may provide an individual with some degree of protection to subsequent HIV infection suggests that the withdrawal of such vaccination may be a partial explanation,” explained Weinstein.

Smallpox immunization was gradually withdrawn from the 1950s following the worldwide eradication of the disease, and HIV has been spreading exponentially since approximately the same time period. Weinstein proposes that vaccination may confer protection against HIV by producing long term alterations in the immune system, possibly including the expression of a certain receptor, CCR5, on the surface of a person’s white blood cells which is exploited by both viruses.

“While these results are very interesting and hopefully may lead to a new weapon against the HIV pandemic, they are very preliminary and it is far too soon to recommend the general use of vaccinia immunization for fighting HIV,” cautioned Weinstein.

Risky business and a woman’s touch
Ball lightning all in the mind, say physicists