You are here: Home › Environment › News › Urgent rethink required on Earth’s carbon-sinks, suggests study
By Will Parker on March 9, 2016 in Environment, News 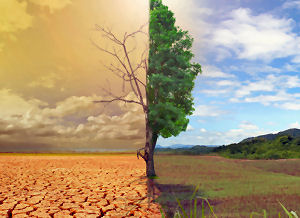 In a new study that expands our understanding of how humans contribute to global warming, scientists have discovered that human activity has changed the terrestrial biosphere to make it a significant contributor to climate change.

Published in Nature, the study looked at the net balance of the three major greenhouse gases – carbon dioxide, methane, and nitrous oxide – for every region of Earth’s landmasses. They found surprisingly, that human-induced emissions of methane and nitrous oxide from ecosystems overwhelmingly surpass the ability of the land to soak up carbon dioxide emissions, which makes the terrestrial biosphere a contributor to climate change.

“Typically we think of land as a net ‘sink’ of carbon dioxide. But we found that the sign of the human-induced impact is reversed if we also take into account methane and nitrous oxide,” noted study co-author Anna Michalak, of the Carnegie Institute.

The study focussed on the so-called biogenic fluxes, or flow ,of the three greenhouse gases on land that were caused by human activities over the last three decades and subtracted out emissions that existed “naturally” during pre-industrial times. Biogenic sources include gas emissions from plants, animals, microbes, and the like. The researchers were interested in finding out how human activities have changed the biogenic fluxes of these gases. Historically, such emissions have included methane emissions from wetlands and nitrous oxide emissions from soil. Human activity and human-caused climate change have changed the magnitude of these fluxes, however, as well as added new categories of biogenic fluxes such as those resulting from sewage, cattle, and fertilizer use.

The scientists first added up all biogenic emissions of carbon dioxide, methane, and nitrous oxide, then subtracted out those that occurred naturally prior to human intervention to get to the net amount. The study did not include non-biogenic gas emissions from activities like fossil fuel burning or natural gas production.

The scientists found that greenhouse gas emissions vary considerably by region. Interestingly, the human-induced emissions of the gases in Southern Asia, including China and India, had a larger net warming effect compared to other areas. Southern Asia contains some 90 percent of the world’s rice fields and more than 60 percent of the world’s nitrogen fertilizer use. Thus, methane emissions in this region are largely from rice cultivation and livestock, while man-made fertilizers are a major source of nitrous oxide.

“This finding reveals for the first time that human activities have transformed the land biosphere to a contributor to climate change,” said lead author of the study, Hanqin Tain director of the International Center for Climate and Global Change Research at Auburn University.

“This study should serve as a wake-up call to governments, policymakers, and individuals around the world,” added Michalak. “We must expand our focus and devise strategies that target the biogenic emissions of these other greenhouse gases if we are to change the course of climate change.”