You are here: Home › Environment › News › Tropical storms may be triggering earthquakes
By Will Parker on December 9, 2011 in Environment, News 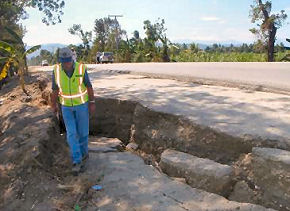 University of Miami scientist Shimon Wdowinski (pictured) says that earthquakes – including the recent seismic events in Haiti and Taiwan – may be triggered by severe tropical storms (cyclones, hurricanes and typhoons). Wdowinski is presenting his, er, groundbreaking study at the 2011 American Geophysical Union Fall Meeting, in San Francisco.

“Very wet rain events are the trigger,” explained Wdowinski, an associate research professor of marine geology and geophysics. “The heavy rain induces thousands of landslides and severe erosion, which removes ground material from the Earth’s surface, releasing the stress load and encouraging movement along faults.” He adds that this earthquake-triggering mechanism is only viable on inclined faults, where the rupture by these faults has a significant vertical movement.

Wdowinski says an analysis of data from the quakes in Taiwan and Haiti showed a strong temporal relationship between the two natural hazards – large earthquakes occurred following a very wet tropical cyclone season.

He points out that over the last 50 years, three very wet tropical cyclone events – Typhoons Morakot, Herb and Flossie – were followed within four years by major earthquakes in Taiwan’s mountainous regions. He adds that the 2010 magnitude 7 earthquake in Haiti occurred one-and-a-half years after two hurricanes and two tropical storms drenched the island nation over a three week period.

Although only several quake locations have been investigated, Wdowinski claims that the tropical cyclone-earthquake pattern exists in other magnitude 5 and above earthquakes. He now plans to analyze patterns in other seismically active mountainous regions – such as the Philippines and Japan.