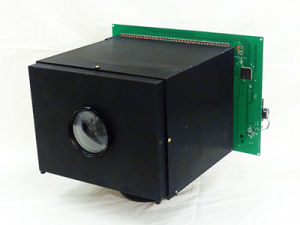 Columbia University researchers led by Shree K. Nayar have developed the first video camera to be fully self-powered – its pixels not only measuring the incident light, but also converting it into electric power. The team is presenting its work next week at the International Conference on Computational Photography at Rice University in Houston.

“We are in the middle of a digital imaging revolution,” says Nayar. “I think we have just seen the tip of the iceberg. Digital imaging is expected to enable many emerging fields including wearable devices, sensor networks, smart environments, personalized medicine, and the Internet of Things. A camera that can function as an untethered device forever – without any external power supply – would be incredibly useful.”

Nayar explained that although digital cameras and solar panels have different purposes – one measures light while the other converts light to power – both are constructed from essentially the same components. At the heart of any digital camera is an image sensor, a chip with millions of pixels. The key enabling device in a pixel is the photodiode, which produces an electric current when exposed to light. This mechanism enables each pixel to measure the intensity of light falling on it. The same photodiode is also used in solar panels to convert incident light to electric power.

Nayar’s team used off-the-shelf components to fabricate an image sensor of 30 x 40 pixels. The pixels – each of which uses just two transistors – are used first to record and read out the image and then to harvest energy and charge the sensor’s power supply – in other words, the image sensor continuously toggles between image capture and power harvesting modes. He added that when the camera is not used to capture images, it can be used to generate power for other devices, such as a phone or a watch.

“A few different designs for image sensors that can harvest energy have been proposed in the past. However, our prototype is the first demonstration of a fully self-powered video camera,” Nayar said. “And, even though we’ve used off-the-shelf components to demonstrate our design, our sensor architecture easily lends itself to a compact solid-state imaging chip. We believe our results are a significant step forward in developing an entirely new generation of cameras that can function for a very long duration – ideally, forever – without being externally powered.”