You are here: Home › News › Space › Spacesuits get skintight makeover
By Will Parker on September 19, 2014 in News, Space 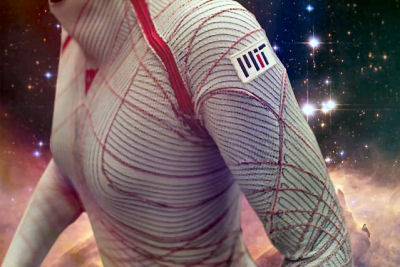 To provide better freedom of movement for astronauts, MIT scientists are designing a skintight spacesuit that uses shape-memory alloys to effectively shrink-wrap the suit around the astronaut’s body. The development of the second-skin spacesuit could see the end of the conventional, bulky, gas-pressurized suit.

Dava Newman, a professor of aeronautics and astronautics at MIT, explained that the key elements of the new “active compression” spacesuit were small, spring-like coils that contract in response to heat. The coils are made from a shape-memory alloy (SMA) – a type of material that “remembers” an engineered shape and, when bent or deformed, can spring back to this shape when heated. The coil design was conceived by co-researcher Bradley Holschuh and is detailed in the journal IEEE/ASME: Transactions on Mechatronics. 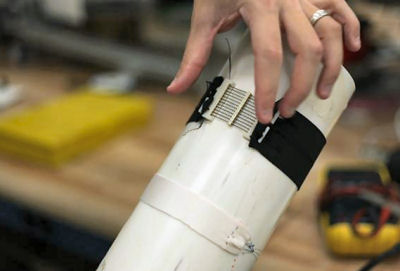 Newman’s team incorporated the coils in a tourniquet-like cuff, and applied a current to generate heat. At a certain trigger temperature, the coils contract to their “remembered” form, tightening the cuff in the process. In subsequent tests, the group found that the pressure produced by the coils equaled that required to fully support an astronaut in space.

“With conventional spacesuits, you’re essentially in a balloon of gas that’s providing you with the necessary one-third of an atmosphere [of pressure] to keep you alive in the vacuum of space,” says Newman. “We want to achieve that same pressurization, but through mechanical counter-pressure – applying the pressure directly to the skin, thus avoiding the gas pressure altogether. We combine passive elastics with active materials. � Ultimately, the big advantage is mobility, and a very lightweight suit for planetary exploration.”

While skintight spacesuits have been proposed in the past, there’s been one hurdle: how to squeeze in and out of a suit that’s extremely tight. The shape-memory alloys may provide a solution, as such materials only contract when heated, and can easily be stretched back to a looser shape when cool.

To find an SMA that would be suitable for use in space, Holschuh considered 14 types of shape-changing materials – ranging from dielectric elastomers to shape-memory polymers – before settling on nickel-titanium shape-memory alloys. When engineered as tightly packed, small-diameter springs, this material contracts when heated to produce a significant amount of force, ideal for use in a lightweight compression garment.

To “train” the alloy, Holschuh first wound it into extremely tight, millimeter-diameter coils then heated the coils to 450 degrees Celsius to set them into an original, or “trained” shape. At room temperature, the coils may be stretched or bent, much like a paper clip. However, at a certain “trigger” temperature (in this case, as low as 60 C), the alloy will begin to spring back to its trained, tightly coiled state.

The researchers rigged an array of coils to an elastic cuff, attaching each coil to a small thread linked to the cuff. They then attached leads to the coils’ opposite ends and applied a voltage, generating heat. Between 60 and 160 C, the coils contracted, pulling the attached threads, and tightening the cuff. “These are basically self-closing buckles,” Holschuh says. “Once you put the suit on, you can run a current through all these little features, and the suit will shrink-wrap you, and pull closed.”

The next challenge is finding a way to keep the suit tight. To do this, Holschuh says there are two options: either maintaining a constant temperature of 60 C, or incorporating a locking mechanism to keep the coils from loosening. The first option would require heavy battery packs, making it infeasible. Holschuh and Newman are currently exploring the second option, looking into potential mechanisms to lock the coils in place.

As for where the coils may be threaded within a spacesuit, Holschuh is contemplating several designs. For instance, an array of coils may be incorporated into the center of a suit, with each coil attached to a thread that radiates to the suit’s extremities. As the coils activate, they could pull on the attached threads – much like the strings of a puppet – to tighten and pressurize the suit.

While the researchers are concentrating mostly on applications in space, Holschuh says the group’s designs and active materials may be used for other purposes, such as in athletic wear or military uniforms. “You could use this as a tourniquet system if someone is bleeding out on the battlefield,” Holschuh says. “If your suit happens to have sensors, it could tourniquet you in the event of injury without you even having to think about it.”