You are here: Home › News › Space › Rare strobe-like binary protostar found
By Will Parker on February 7, 2013 in News, Space 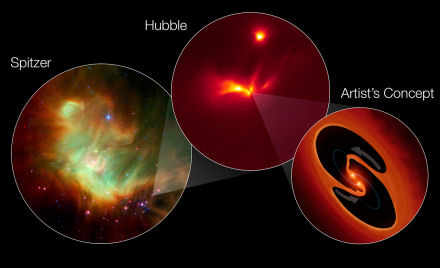 The Spitzer and Hubble space telescopes have teamed up to uncover a mysterious infant star that behaves like a strobe light, a phenomenon that astronomers think is caused by periodic interactions between two newly formed stars that are gravitationally bound to each other.

Every 25.34 days, the object (located 950 light-years from Earth and designated LRLL 54361) unleashes a burst of light. Although a similar phenomenon has been observed in two other young stellar objects, this is the most powerful such beacon seen to date. “This protostar has such large brightness variations with a precise period that it is very difficult to explain,” said James Muzerolle, of the Space Telescope Science Institute.

He and his fellow astronomers theorize the flashes are caused by material suddenly being dumped onto the growing stars. A blast of radiation is then unleashed each time the stars get close to each other in their very eccentric orbits. As the stars approach each other, dust and gas are dragged from the inner edge of a surrounding disk. The material ultimately crashes onto one or both stars, which triggers a flash of light.

The system is rare because close binaries account for only a few percent of our galaxy’s stellar population and it is likely a brief, transitory phase in the birth of a star system.