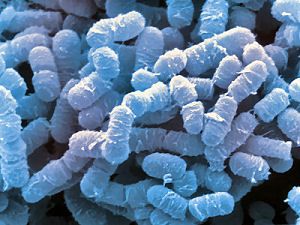 A study presented at the 2014 American Society for Microbiology meeting adds to the growing body of evidence that multiple sclerosis may be triggered by Clostridium perfringens, a spore-forming bacterium that is one of the most common causes of foodborne illness.

Multiple sclerosis (MS) is an inflammatory disease of the central nervous system characterized by blood brain barrier permeability and demyelination, a process in which the insulating myelin sheaths of neurons are damaged. The disease is thought to be triggered in a genetically susceptible individual by a combination of one or more environmental factors. The environmental trigger of MS, however, is still unknown.

“We provide evidence that supports epsilon toxin’s ability to cause BBB permeability and show that epsilon toxin kills the brain’s myelin producing cells, oligodendrocytes; the same cells that die in MS lesions,” says Jennifer Linden of Weill Cornell Medical College, who presented the research. “We also show that epsilon toxin targets other cells types associated with MS inflammation such as the retinal vascular and meningeal cells. Epsilon toxin may be responsible for triggering MS.”

Epsilon toxin is produced by certain strains of Clostridium perfringens. The CDC estimates that non-epsilon toxin producing C. perfringens strains cause nearly a million cases of foodborne illness each year.

Previous studies have suggested that C. perfringens, and in particular epsilon toxin, may play a role in triggering MS. Late last year Linden and her colleagues discovered C. perfringens type B (a strain that is not known to infect humans and produces the epsilon toxin) in a 21-year-old woman who was experiencing a flare-up of her MS. To further test their hypothesis Linden and her colleagues studied the behavior of the toxin in mice. Specifically, which cells it targeted.

They discovered that the toxin did target the brain cells associated with MS pathology. But that was not all they found. “Originally, we only thought that epsilon toxin would target the brain endothelium cells and oligodendrocytes; we just happened to notice that it also bound to and killed meningeal cells. This was exciting because it provides a possible explanation for meningeal inflammation and subpial cortical lesions exclusively observed in MS patients, but not fully understood,” explained Linden.

“If it can be confirmed that epsilon toxin is indeed a trigger of MS, development of a neutralizing antibody or vaccine directed against epsilon toxin might stop the progression of the disease – or prevent it from even developing,” said Linden.