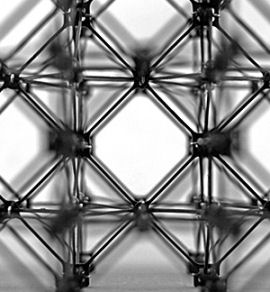 In what could herald an entirely new approach to manufacturing all manner of complex structures, MIT researchers have created tiny lightweight building blocks that can be snapped together much like Lego bricks to create structures that are exceptionally strong and light. The new approach to construction is described in a paper appearing this week in the journal Science.

Head of MIT’s Center for Bits and Atoms, Neil Gershenfeld, likens the structures to chainmail. The mass-produced parts, based on a novel geometry that MIT researcher Kenneth Cheung developed with Gershenfeld, form a structure that is 10-times stiffer for a given weight than existing ultralight materials. Equally as important, the structures can also be easily disassembled and reassembled into different configurations.

Cheung explained that the flat, cross-shaped composite pieces are clipped into a cubic lattice of octahedral cells, a structure called a “cuboct” – which is similar to the crystal structure of the mineral perovskite. Like the buckle on a seat belt, they are designed to be strong in the directions of forces that might be applied in normal use, while pressure in an entirely different direction will release them.

The new technique means much less material is required to carry a given load. This could not only reduce the weight of vehicles but also reduce the costs of construction and assembly, while allowing greater design flexibility. The system is very much geared toward “anything you need to move, or put in the air or in space,” according to Cheung.

Gershenfeld explained that with conventional composites – now used in everything from golf clubs to the components of Boeing’s new 787 airplane – each piece is manufactured as a continuous unit. Therefore, manufacturing large structures (such as airplane wings) requires large factories where fibers and resins can be wound and parts heat-cured as a whole. But manufacturing this way has a drawback: the joints between large components tend to be where structural failures happen. 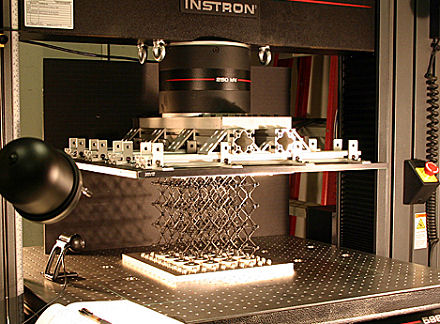 Cheung and Gershenfeld say their method doesn’t have this problem because forces are conveyed through the structures inside the pieces and distributed across the lattice structure. They point out that their structures behave like an elastic solid, with a stiffness, or modulus, equal to that of much heavier traditional structures.

“What’s more,” Gershenfeld says, “when conventional composite materials are stressed to the breaking point, they tend to fail abruptly and at large scale. But the new modular system tends to fail only incrementally, meaning it is more reliable and can more easily be repaired. It’s a massively redundant system.”

Cheung adds that the possibility of linking multiple types of parts introduces a new degree of design freedom into composite manufacturing. “By combining different part types, [designers] can make morphing structures with identical geometry but that bend in different ways in response to loads: Instead of moving only at fixed joints, the entire arm of a robot or wing of an airplane could change shape.”