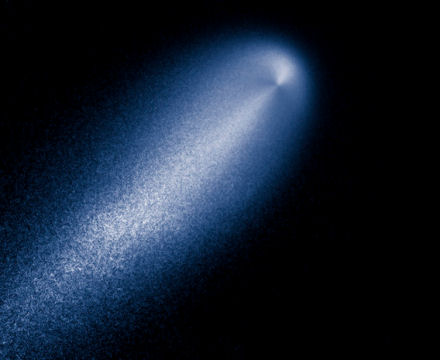 Hubble has given astronomers their clearest view yet of ISON, a newly-discovered sun-grazer comet that could light up the sky later this year. Astronomers are keenly interested in ISON as it offers a rare opportunity to witness a comet’s evolution as it makes its first-ever journey through the inner solar system.

ISON, like all comets, is a “dirty snowball” – a clump of frozen gases mixed with dust, formed in a distant reach of the solar system, traveling on an orbit influenced by the gravitational pull of the Sun and its planets. ISON’s orbit will bring it to a perihelion (maximum approach to the Sun) of 700,000 miles on November 28.

The new image was captured on April 10, when ISON was some 386 million miles from the Sun – slightly closer to the Sun than the planet Jupiter. Comets become more active as they near the inner solar system, where the Sun’s heat evaporates their ices into jets of gases and dust. But even at this great distance ISON is already active, with a strong jet blasting dust particles off its nucleus.

Next week, University of Maryland researchers will use Hubble to gather information about ISON’s gases. “We want to look for the ratio of the three dominant ices, water, frozen carbon monoxide, and frozen carbon dioxide, or dry ice,” said Maryland astronomy Prof. Michael A’Hearn. “That can tell us the temperature at which the comet formed, and with that temperature, we can then say where in the solar system it formed.”

As well as the Hubble Space Telescope, the Maryland team will also use the Deep Impact spacecraft to continue to follow ISON as it travels toward its November close-up with the sun.