You are here: Home › Biology › News › Ancient microbes found beneath ice of Antarctic lake
By Will Parker on November 27, 2012 in Biology, News

Scientists have discovered a viable community of bacteria that survives in a pitch-black, salty, and sub-zero environment beneath nearly 20 meters of ice in one of Antarctica’s most isolated lakes. Lake Vida, the largest of several lakes found in the McMurdo Dry Valleys, contains no oxygen and possesses the highest nitrous oxide levels of any natural water body on the planet. A briny liquid that is approximately six times saltier than seawater percolates throughout the icy environment that has an average temperature of minus 13.5 degrees centigrade (8 degrees Fahrenheit). 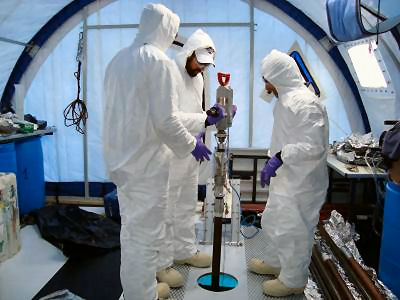 To avoid sample contamination, the scientists worked under secure, sterile tents on the lake’s surface to keep the site and equipment clean as they drilled ice cores. They then assessed the chemical qualities of the water and its potential for harboring and sustaining life, in addition to describing the diversity of the organisms detected. Their findings, published in the Proceedings of the National Academy of Sciences, provide a fascinating window into one of the most unique closed ecosystems on Earth that is thought to have been isolated from outside influences for more than 3,000 years.

“Our knowledge of geochemical and microbial processes in lightless icy environments, especially at subzero temperatures, has been mostly unknown up until now,” said researcher Alison Murray, a microbial ecologist at the Desert Research Institute. “This work expands our understanding of the types of life that can survive in these isolated, cryoecosystems and how different strategies may be used to exist in such challenging environments.” 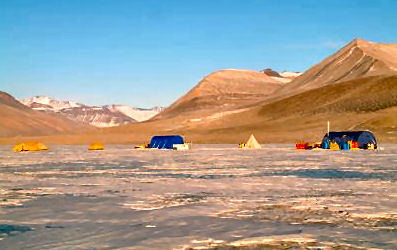 Despite the very cold, dark and isolated nature of the habitat, the scientists found that it harbors a surprisingly diverse and abundant assemblage of bacteria. Most intriguingly, the microbes survive without a source of energy from the sun. Analyses suggest that chemical reactions between the brine and the underlying iron-rich sediments generate nitrous oxide and molecular hydrogen. The latter, speculate the researchers, may provide the energy needed to support the brine’s diverse microbial life.

“It’s plausible that a life-supporting energy source exists solely from the chemical reaction between anoxic salt water and the rock,” explained co-researcher Christian Fritsen, also from the Desert Research Institute.

“If that’s the case,” added Murray, “this gives us an entirely new framework for thinking of how life can be supported in cryoecosystems on Earth and in other icy worlds of the Universe.”

Further research is currently under way to analyze the abiotic, chemical interactions between the Lake Vida brine and the sediment, in addition to investigating the microbial community by using different genome sequencing approaches. The results could help establish the potential for life in other salty, cryogenic environments beyond Earth.