You are here: Home › Mind and Brain › News › Alcohol rewires brain for PTSD
By Will Parker on September 3, 2012 in Mind and Brain, News 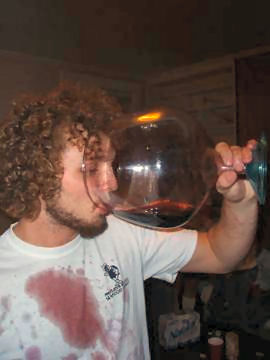 Heavy drinking appears to impair the brain’s ability to recover from trauma and may put people at greater risk for post-traumatic stress disorder (PTSD), say scientists from the University of North Carolina and the National Institute on Alcohol Abuse and Alcoholism.

Medicos have long recognized a link between alcoholism and anxiety disorders – simply, those who drink heavily are at increased risk for traumatic events like car accidents and domestic violence. But this only partially explains the connection, argues the new study, which reveals that heavy alcohol use actually rewires brain circuitry, making it harder for heavy drinkers to recover following a traumatic experience.

In the new study, the researchers gave one group of mice doses of alcohol equivalent to double the legal driving limit in humans. A second group of mice was given no alcohol. The team then used mild electric shocks to train all the mice to fear the sound of a brief tone.

The pattern, say the researchers, is similar to what is seen in patients with PTSD, who have trouble overcoming fear even when they are no longer in a dangerous situation.

The researchers traced the effect to differences in the neural circuitry of the alcohol-exposed mice. Comparing the brains of the mice, the researchers noticed nerve cells in the prefrontal cortex of the alcohol-exposed mice actually had a different shape than those of the other mice. In addition, the activity of a key receptor, NMDA, was suppressed in the mice given heavy doses of alcohol.

“There’s a whole spectrum to how people react to a traumatic event,” said study author and University of North Carolina pharmacologist Thomas Kash. “It’s the recovery that we’re looking at – the ability to say ‘this is not dangerous anymore.’ Our research shows that chronic exposure to alcohol can cause a deficit with regard to how our cognitive brain centers control our emotional brain centers.”

The findings, published in Nature Neuroscience, pinpoint exactly where alcohol causes the damage that leads to problems overcoming fear. “We’re not only seeing that alcohol has detrimental effects on a clinically important emotional process, but we’re able to offer some insight into how alcohol might do so by disrupting the functioning of some very specific brain circuits,” added co-author Andrew Holmes.

Understanding the relationship between alcohol and anxiety at the molecular level could offer new possibilities for developing drugs to help patients with anxiety disorders who also have a history of heavy alcohol use. “This study is exciting because it gives us a specific molecule to look at in a specific brain region, thus opening the door to discovering new methods to treat these disorders,” said Kash.