You are here: Home › Mind and Brain › News › Brain wave trajectories challenge area-specific notion of brain activity
By Will Parker on March 20, 2013 in Mind and Brain, News 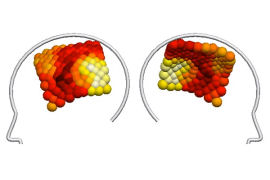 Our understanding of brain activity has traditionally been linked to specific brain areas – an area associated with speech, vision, etc. – but Belgian scientists say this view may be overly rigid. Their experiments reveal waves of activity across the entire cerebral cortex when a given task is initiated.

“The brain can be studied on various scales,” said researcher David Alexander. “You have the neurons, the circuits between the neurons, theBrodmann areas – brain areas that correspond to a certain function – and the entire cortex. Traditionally, scientists looked at local activity when studying brain activity, for example, activity in the Brodmann areas. To do this, you take EEG’s [electroencephalograms] to measure the brain’s electrical activity while a subject performs a task and then you try to trace that activity back to one or more brain areas.”

In their new study, Alexander and co-researcher Cees van Leeuwen decided to explore the activity in the cerebral cortex as a whole. “The brain is a non-stop, always-active system,” explained van Leeuwen. “When we perceive something, the information does not end up in a specific part of our brain. Rather, it is added to the brain’s existing activity. If we measure the electrochemical activity of the whole cortex, we find wave-like patterns. This shows that brain activity is not local but rather that activity constantly moves from one part of the brain to another. The local activity in the Brodmann areas only appears when you average over many such waves.”

The researchers say their experiments at KU Leuven in Belgium revealed that each activity wave in the cerebral cortex is unique. “When someone repeats the same action, such as drumming their fingers, the motor centre in the brain is stimulated,” said Alexander. “But with each individual action, you still get a different wave across the cortex as a whole.”

The researchers speculate that perhaps the person was more engaged in the action the first time than he was the second time, or perhaps he had something else on his mind, or had a different intention for the action. The direction of the waves is also meaningful, according to Alexander. “Activity waves related to orienting move differently in children – more prominently from back to front – than in adults. With further research, we hope to unravel what these different wave trajectories mean.”