You are here: Home › Humans › News › Waitresses in red win tips race
By Will Parker on August 5, 2012 in Humans, News 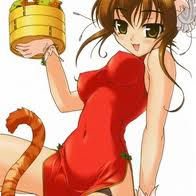 Male restaurant customers give consistently higher tips – around 20 percent more – to waitresses wearing red, say hospitality researchers. The study, in the Journal of Hospitality and Tourism Research, also found that clothing color had no discernible effect on the tipping habits of female customers.

Researchers Nicolas Guéguen and Céline Jacob based their findings on observations of more than 250 restaurant customers. The experiment involved recruiting eleven waitresses in five restaurants to wear the same tee shirt in different colors (black, white, red, blue, green, and yellow) on different days over a six-week period. The waitresses were instructed to act as they normally would to all customers and to record how much they received as a tip from each customer.

Guéguen and Jacob found not only that male patrons gave higher tips than female patrons in general, but that men gave between 15 percent and 26 percent more to waitresses wearing red. Previous research has found that the color red increases the physical and sexual attractiveness of women.

Given that the clothing color had no effect on the tipping of female patrons, the researchers suggest wearing red work clothes could significantly boost waitresses’ incomes.

Related:
Discuss this article in our forum
Did Trichromatic Vision Evolve Because of Colorful Bottoms Or Colorful Fruit?
Women more likely to bed men in red
The color red provides speed and strength boost