You are here: Home › News › Worry Fuel › Antibiotics found to have transgenerational effects
By Will Parker on April 28, 2012 in News, Worry Fuel 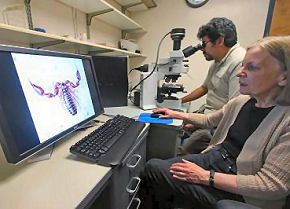 Zeh’s work involved a three-generation study of Cordylochernes scorpioides, a small scorpion-like arachnid. To control for genetic influences, in the first generation, brothers and sisters from each of 21 broods were either treated with weekly doses of tetracycline from birth to adulthood or were reared as untreated controls. Subsequent generations were not treated with tetracycline.

Tetracycline has a significant detrimental effect on male reproductive function and sperm health in pseudoscorpions, reducing viability by up to 25 percent. “And now we know that effect is passed on to the next generation,” said Zeh, adding that the effect was not seen in subsequent generations.

Related:
Discuss this article in our forum
Bacterial “disabler” treatment side-steps antibiotic resistance
“It’s not all in the genes,” say epigenetic code-breakers
Intriguing evidence of charitable behavior in bacteria
25% Of Prescribed Antibiotics Ineffective