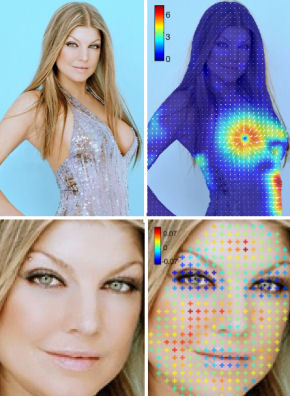 Dartmouth College computer scientists have developed a program to automatically rank photographs based on the amount of retouching the picture has undergone. Use of the system by photo editors and advertisers would, the researchers say, help rein inskyrocketing rates of eating disorders and body dysmorphia.

The researchers’ work, reported in theProceedings of the National Academy of Sciences, notes that the AMA has recently adopted a policy to “discourage the altering of photographs in a manner that could promote unrealistic expectations of appropriate body image.” The same public health concerns are echoed in the UK, where two L’Oreal cosmetics advertisements featuring Julia Roberts and Christy Turlington were banned by the Advertising Standards Agency following complaints that the magazine adverts were misleading because the photos had been digitally altered.

But the researchers argue that ad hoc complaints and bans are not the answer to addressing what is a pervasive problem. Dartmouth’s Hany Farid and Eric Keeway assert that an automated ranking system allows advertisers to truthfully and accurately characterize the extent to which an image has been altered while allowing the public to make informed judgments. Their goal, they say, is to create a metric that provides an objective assessment of how much alteration has been made to an image.

Their proposed rating system takes into account common practices such as cropping and color adjustment while providing assessment of other kinds of modifications that dramatically change a person’s appearance. The algorithm assesses geometric alterations such as slimming legs, adjusting facial symmetry, and correcting posture, as well as photometric manipulations that might include removing wrinkles, “bags” under the eyes and skin blemishes.

“We start with the before and after digital images from which we automatically estimate the geometric and photometric changes, effectively reverse engineering the manipulations that a photo retoucher has made,” Farid explained.

“Such a rating may provide incentive for publishers and models to reduce some of the more extreme forms of digital retouching that are common today,” the researchers conclude. “It remains to be seen if this rating can mediate the adverse effects of being inundated with unrealistic body images.”