You are here: Home › Health › Diet › News › BPA levels in canned soup unexpectedly high
By Will Parker on November 25, 2011 in Diet, News 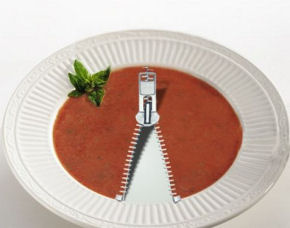 In one of the first studies to investigate levels of the chemical bisphenol A (BPA) in canned food, Harvard researchers have recorded unexpectedly high levels of the plastics additive from tinned soups, prompting a warning for consumers of those products. The new findings, appearing in the Journal of the American Medical Association, show a more than 1,000 percent increase in urinary BPA in human subjects who consumed a serving of canned soup each day for five days.

Exposure to BPA – known as an endocrine disruptor – has been linked to reproductive problems, diabetes, and obesity in humans. As well as canned food and drinks, BPA is also found in polycarbonate bottles and dentistry composites and sealants.

“We’ve known for a while that drinking beverages that have been stored in certain hard plastics can increase the amount of BPA in your body. This study suggests that canned foods may be an even greater concern, especially given their wide use,” said Jenny Carwile, lead author of the study.

In the study, one group of subjects consumed a 12-ounce serving of vegetarian canned soup each day for five days; another group consumed 12 ounces of freshly prepared soup daily for five days. Samples taken during the testing showed that consumption of a serving of canned soup daily was associated with a 1,221 percent increase in BPA compared to levels in urine collected after consumption of fresh soup.

“The magnitude of the rise in urinary BPA we observed after just one serving of soup was unexpected and may be of concern among individuals who regularly consume foods from cans or drink several canned beverages daily,” concluded co-researcher Karin B. Michels.