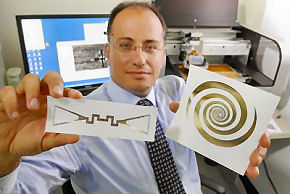 Georgia Tech scientists using a novel printable ultra-wideband antenna have shown that the ambient electromagnetic waves from TV stations, radio stations, satellites and cell phones can be harvested and used to power a range of electronic devices.

“There is a large amount of electromagnetic energy all around us, but nobody has been able to tap into it,” said project leader Manos Tentzeris (pictured). “We are using an ultra-wideband antenna that lets us exploit a variety of signals in different frequency ranges, giving us greatly increased power-gathering capability.”

Communications devices transmit energy in many different frequency ranges and the scavenging devices can capture this ambient energy and then store it in capacitors and batteries. The scavenging technology can presently take advantage of frequencies from FM radio to radar (100 MHz – 15 GHz). Exploiting a range of electromagnetic bands increases the dependability of energy scavenging devices, explained Tentzeris. If one frequency range fades temporarily due to usage variations, the system can still exploit other frequencies.

The researchers have already successfully demonstrated a temperature sensor using electromagnetic energy captured from a television station. They are preparing another demonstration in which a microprocessor would be activated simply by holding it in the air.

Tentzeris is using standard materials inkjet printers to combine sensors, antennas and energy scavenging capabilities on paper or flexible plastics. However, the researchers add what Tentzeris calls “a unique in house recipe” containing silver nanoparticles and/or other nanoparticles in an emulsion. This approach enables the team to print not only components and circuits, but also novel sensing devices based on such nanomaterials as carbon nanotubes.

The researchers believe that such self-powered, wireless paper-based sensors will soon be widely available at very low cost. The resulting proliferation of autonomous, inexpensive sensors could be used for applications that include security, environment monitoring, medicine and engineering.