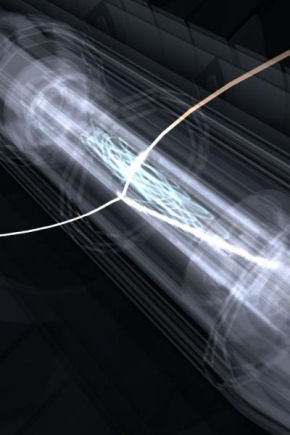 Antimatter remains an enigma, but researchers at CERN may soon be able to ascertain some of its key properties thanks to groundbreaking techniques they’ve developed that trap and store antimatter for more than 15 minutes. Reporting their work in Nature Physics, the ALPHA team (an international group of scientists working at CERN) outlined their plans to refine the antihydrogen trap with “the hope that by 2012 we will have a new trap with laser access to allow spectroscopic experiments on the antiatoms.”

Antihydrogen atoms were first made in large quantities at CERN eight years ago, but they can’t be stored conventionally since antiatoms touching ordinary-matter atoms in the walls of the container would instantly annihilate each other. Using a “magnetic bottle” with a superconducting magnet to suspend the antiatoms away from the bottle walls, the researchers last year demonstrated the trapping of antihydrogen atom capture for about a tenth of a second. Improvements to the technique have now enabled routine trapping times of more than 15 minutes.

Scientists want to measure the properties of antiatoms in order to determine whether their electromagnetic and gravitational interactions are the same as normal matter. One goal is to check whether antiatoms abide by CPT (charge-parity-time) symmetry, as do normal atoms. CPT symmetry means that a particle would behave the same way in a mirror universe if it had the opposite charge and moved backward in time.

“Any hint of CPT symmetry breaking would require a serious rethink of our understanding of nature,” said Danish scientist Jeffrey Hangst, a spokesperson for the ALPHA team. “But half of the universe has gone missing, so some kind of rethink is apparently on the agenda.”

Importantly, the ALPHA team not only made and stored the long-lived antihydrogen atoms, they were also able to measure their energy distribution. “It may not sound exciting, but it’s the first experiment done on trapped antihydrogen atoms,” team member Jonathan Wurtele of Berkeley Labs explained. “This summer we’re planning more experiments, with microwaves. Hopefully we will measure microwave-induced changes of the atomic state of the anti-atoms.”