You are here: Home › News › Space › More evidence for asteroids creating life on Earth
By Will Parker on January 20, 2011 in News, Space 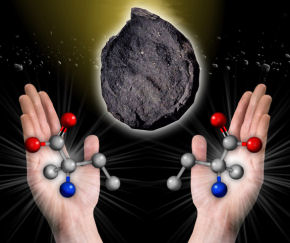 All life on Earth uses “left-handed” amino acids to build proteins and NASA has now found that a greater number of asteroids were capable of creating these left-handed amino acids than previously thought.

In March 2009, researchers at NASA’s Goddard Space Flight Center reported the discovery ofan excess of the left-handed form of the amino acid isovaline in samples of meteorites that came from carbon-rich asteroids. This suggests that left-handed life may have gotten its start in space, where conditions in asteroids favored the creation of left-handed amino acids. Meteorite impacts could have supplied this material, enriched in left-handed molecules, to Earth. The bias toward left-handedness, posit the researchers, would have been perpetuated as this material was incorporated into emerging lifeforms.

In the new research, the team reports finding excess left-handed isovaline (L-isovaline) in a much wider variety of carbon-rich meteorites. “This tells us our initial discovery wasn’t a fluke; that there really was something going on in the asteroids where these meteorites came from that favors the creation of left-handed amino acids,” said Goddard’s Dr. Daniel Glavin. Glavin is the lead author of a paper about the discovery published in Meteoritics and Planetary Science.

The researchers are now trying to understand what process creates these extra left-handed amino acids. “Liquid water seems to be the key,” notes Glavin. “We can tell how much these asteroids were altered by liquid water by analyzing the minerals their meteorites contain. The more these asteroids were altered, the greater the excess L-isovaline we found. This indicates some process involving liquid water favors the creation of left-handed amino acids.”

Another clue comes from the total amount of isovaline found in each meteorite. “In the meteorites with the largest left-handed excess, we find about 1,000 times less isovaline than in meteorites with a small or non-detectable left-handed excess. This tells us that to get the excess, you need to use up or destroy the amino acid, so the process is a double-edged sword,” says Glavin.

Whatever it may be, the water-alteration process only amplifies a small existing left-handed excess, it does not create the bias, according to Glavin. Something in the pre-solar nebula created a small initial bias toward L-isovaline and presumably many other left-handed amino acids as well.