You are here: Home › Environment › News › Size of oceanic plastic patch “grossly exaggerated”
By Will Parker on January 5, 2011 in Environment, News 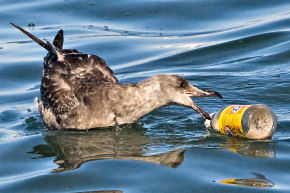 There’s a significant amount of plastic trash floating in the northern Pacific Ocean, but claims that the “Great Garbage Patch” between California and Japan is twice the size of Texas are grossly exaggerated, according to a new analysis from Oregon State University.

“There is no doubt that the amount of plastic in the world’s oceans is troubling, but this kind of exaggeration undermines the credibility of scientists,” pointed out Angelicque White, an oceanographer at Oregon State University. “We have data that allow us to make reasonable estimates; we don’t need the hyperbole. Given the observed concentration of plastic in the North Pacific, it is simply inaccurate to state that plastic outweighs plankton, or that we have observed an exponential increase in plastic.”

White participated in one of the few expeditions solely aimed at understanding the abundance of plastic debris and the associated impact of plastic on microbial communities. That trip showed that the hypothetically “cohesive” plastic patch is actually less than 1 percent of the geographic size of Texas.

“The amount of plastic out there isn’t trivial,” White said. “But using the highest concentrations ever reported by scientists produces a patch that is a small fraction of the state of Texas, not twice the size.”

In other research by scientists at the Woods Hole Oceanographic Institution, the amount of plastic recorded in the ocean hasn’t increased since the mid-1980s – despite greater production and consumption of materials made from plastic.

“Are we doing a better job of preventing plastics from getting into the ocean?” White said. “Is more plastic sinking out of the surface waters? Or is it being more efficiently broken down? We just don’t know. But the data on hand simply do not suggest that ‘plastic patches’ have increased in size.”

White noted that while there is growing interest in removing plastic from the ocean, such efforts would be costly, inefficient, and may have unforeseen consequences. It would be difficult, for example, to remove plastic particles from ocean waters without inadvertently removing phytoplankton, zooplankton, and small surface-dwelling aquatic creatures. “These small organisms are the heartbeat of the ocean,” she said. “They are the foundation of healthy ocean food chains and immensely more abundant than plastic debris.”

Interestingly, during a recent expedition, White discovered that photosynthetic microbes were thriving on many plastic particles, in essence confirming that plastic is prime real estate for certain microbes.

Sunken plastic, particularly offshore of large population centers, may also be an issue, says White. A recent survey from California found that 3 percent of the southern California Bight’s ocean floor was covered with plastic. But little, overall, is known about how much plastic has accumulated at the bottom of the ocean, and how far offshore these debris fields extend.

There are other issues with plastic, White said, including the possibility that floating debris may act as a vector for introducing invasive species into sensitive habitats. “If there is a takeaway message, it’s that we should consider it good news that the ‘garbage patch’ doesn’t seem to be as bad as advertised,” White said, “but since it would be prohibitively costly to remove the plastic, we need to focus our efforts on preventing more trash from fouling our oceans.”