You are here: Home › News › Animal kingdom’s testicle king revealed
By Will Parker on November 10, 2010 in News 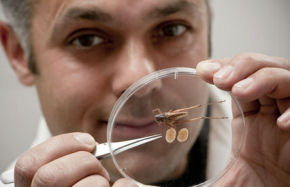 UK researchers at the University of Derby and University of Cambridge believe they have found which species has the largest testicles in relation to body weight on the planet, and also why such gargantuan gonads are necessary.

The Tuberous Bushcricket (Platycleis affinis) gets the honors, say the researchers who noted that its testes represent 14 percent of body mass. “We couldn’t believe the size of these organs, they seemed to fill the entire abdomen,” said Dr Karim Vahed (pictured), from the University of Derby.

Vahed’s paper, in Biology Letters, explains that testes size is traditionally linked to female mating behavior (testes tend to be larger in species where females are more promiscuous). But this may not be true for the Bushcricket. “Our study appears to be the first to show that, in the case of the Tuberous Bushcricket, bigger testes don’t necessarily produce more sperm per ejaculate.”

The anomaly became apparent when the researchers compared relative testes size across 21 species of bushcricket. As with other studies, they found testes were proportionately larger in species where females mated with more males – female Tuberous bushcrickets mate with up to 23 different males in their two-month adult life. However, the surprise was that the Tuberous bushcricket did not produce more sperm: in fact they producedless voluminous ejaculates.

“Traditionally it has been pretty safe to assume that when females are promiscuous, males use monstrously-sized testicles to deliver huge numbers of sperm to swamp the competition – even in primates. Our study shows that we have to rethink this assumption. It looks as though the testes may be that big simply to allow males to mate repeatedly without their sperm reserves being exhausted,” explained co-researcher James Gilbert.

This suggests that extra large testes in bushcrickets allow males to transfer relatively small ejaculates to a greater number of females. “Males don’t put all their eggs (or rather sperm!) in one basket,” quipped Vahed.

Sperm competition is most intense when the female of the species mates with many males; the male that has produced the most sperm is often assumed to be at an advantage, hence the development of larger testes in such species. But more promiscuous females also increase the number of mating opportunities available for the male. It is therefore possible that larger testes have evolved in more polyandrous species because they allow an increased rate of ejaculate production, enabling the male to engage in a greater number of successive matings, as indicated by this latest study. The researchers suggest these findings offer food for thought about the links between endowment, promiscuity and reproduction within insects in the biological world.

TEST SWITCH FOR ARCADE WITH 3 BUTTONS AND BRACKET