You are here: Home › News › Fizzy drinks titillate pain receptors
By Will Parker on September 29, 2010 in News 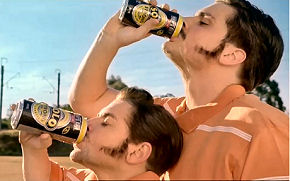 University of Southern California scientists have discovered that the carbon dioxide in fizzy drinks activates the same pain sensors as mustard and horseradish, leading them to speculate that we consume soda to prove our toughness.

Emily Liman, senior author of the study into carbonation’s effects, explained that it evokes two distinct sensations. “It makes things sour and it also makes them burn. We have all felt that noxious tingling sensation when soda goes down your throat too fast,” she said. “What we did not know was which cells and which molecules within those cells are responsible for the painful sensation we experience when we drink a carbonated soda.”

Liman’s experiment, reported in the Journal of Neuroscience, involved flowing carbonated saline onto a dish of nerve cells from the sensory circuits in the nose and mouth. She found that the gas activated only a particular type of cell.

“The cells that responded to CO2 were the same cells that detect mustard,” Liman said. “These cells express a gene known as TRPA1 and serve as general pain sensors.” Mice missing the TRPA1 gene showed a greatly reduced response to carbon dioxide, while adding the TRPA1 genetic code to CO2-insensitive cells made them responsive to the gas.

Now that carbonated beverages have been linked to the body’s pain circuits, some may wonder why we consume them. Liman cited studies going back as far as 1885 that found carbonation dramatically reduced the growth of bacteria. “Or it may be a macho thing,” she speculated.

Related:
Soda drinks found to accelerate signs of aging
Traveling into the future… with sugar
Savoring The Flavoring