You are here: Home › News › Bright light at night carcinogenic
By Will Parker on September 3, 2010 in News 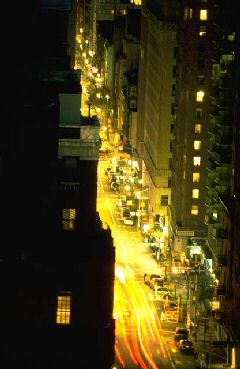 A new study from the University of Haifa confirms the theory that bright artificial lighting at night disrupts the body’s production of melatonin and increases susceptibility to prostate cancer in men and breast cancer in women. “High power light bulbs contribute more to ‘environmental light pollution’, which the study has shown is a carcinogenic pollution,” said Professor Abraham Haim, who lead the study.

Earlier studies have shown that people living in areas that have more night-time illumination are more susceptible to cancer. The researchers’ hypothesis was that light-at-night (LAN) harms production of melatonin, a hormone that is released from the pineal gland during the dark part of the 24h cycle and which is linked to the body’s cyclical night-day activity. When this hormone is suppressed, the occurrence of cancer rises.

The study also discovered that suppression of melatonin definitely influences development of the tumor. The size of tumor in mice exposed to “long days” but treated with melatonin was only 0.62 cubic cm. on average, which is not much different from the size of the growth in mice exposed to “short days”. The study also found that the death rate in mice treated with melatonin was significantly lower than in those not treated.

The researchers say that their study results show that suppression of melatonin due to exposure to LAN is linked to the worrying rise in the number of cancer patients over the past few years. “Exposure to LAN- disrupts our biological clock and affects the cyclical rhythm that has developed over hundreds of millions of evolutionary years that were devoid of LAN. Light pollution as an environmental problem is gaining awareness around the world, and the World Health Organization has already classified working the night shift as a higher grade of cancer risk,” the researchers noted.