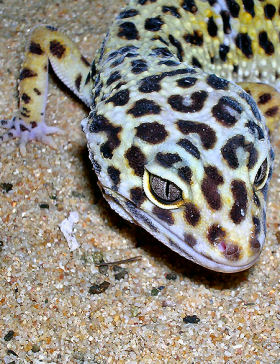 Geckos will shed their tails as a decoy for predators, but little is known about what controls the complex movements of the tail once it separates from the lizard’s body. Now, a new study shows that the signals responsible for the movements of the detached tail begin in a “control center” at the very end of the tail.

“Much is known about the ecological ramifications of tail loss, such as distracting predators, storing energy reserves and establishing social status, but little is known about the pattern and control of movement of automized gecko tails,” says Russell. “What we’ve discovered is that the tail does not simply oscillate in a repetitive fashion, but has an intricate repertoire of varied and highly complex movements, including acrobatic flips up to three centimeters in height.”

“An intriguing, and as yet unanswered, question is what is the source of the stimulus is that initiates complex movements in the shed tails of leopard geckos,” adds Higham. “The most plausible explanation is that the tail relies on sensory feedback from the environment. Sensors on its surface may tell it to jump, pivot or travel in a certain direction.”

The ability of an animal, or part of an animal, to move without the active control of higher centers in the brain is well known, but this generally occurs as a result of traumatic physical injury. Tails of lizards are shed under the animal’s own control. Because of this, the behavior of the shed part has adaptive evolutionary importance and its actions are programmed to assist in the owner’s survival. The movements are coordinated by the part of the spinal cord that is housed in the tail. The isolated tail serves as a vehicle for studying the ways that nerves and muscles act together to generate controlled but complex outputs in the absence of the influence of the brain.

The study shows that the signals responsible for movements of the shed tail begin at the very far end of the tail, indicating that there is a control centre located there that is likely overridden by higher centers until the tail is shed, at which point its potential is realized. The new findings are significant as they can provide a model for studying the complex functions of the spinal cord and the effects of spinal cord injuries. “The automized gecko tail may be an excellent model for understanding the spontaneous activity that is sometimes observed following partial or complete spinal cord injury,” says Russell.