You are here: Home › News › “Spin battery” provides novel electrical storage
By Will Parker on March 12, 2009 in News 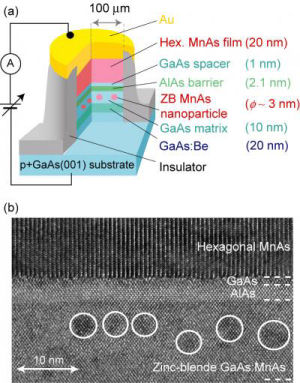 Researchers at the University of Miami and at the Universities of Tokyo and Tohoku, Japan, have developed what they call a “spin battery” which is “charged” by applying a large magnetic field to nano-magnets in a device called a magnetic tunnel junction (MTJ). In the future, the new battery could power cars and computers, say the researchers.

University of Miami physicist, Stewart E. Barnes, explained to Nature how the device can store energy in magnets rather than through chemical reactions. Like winding up a toy car, the spin battery is “wound up” by applying a large magnetic field. “We had anticipated the effect, but the device produced a voltage over a hundred times too big and for tens of minutes, rather than for milliseconds as we had expected,” Barnes said. “That this was counterintuitive is what lead to our theoretical understanding of what was really going on.”

“There are magnets hidden away in many things, for example there are several in a mobile telephone, many in a car, and they are what keeps your refrigerator closed,” he said. “There are so many that even a small change in the way we understand of how they work, and which might lead to only a very small improvement in future machines, has a significant financial and energetic impact.”