You are here: Home › News › Loud Music Boosts Booze Consumption
By Will Parker on July 21, 2008 in News 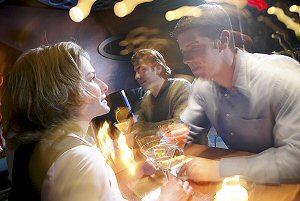 Published in the journal Alcoholism: Clinical & Experimental Research, a French study has found that loud music in a bar setting leads to more drinking in less time.

“Previous research had shown that fast music can cause fast drinking, and that music versus no music can cause a person to spend more time in a bar,” said Nicolas Guéguen, a professor of behavioral sciences at the Université de Bretagne-Sud. “This is the first time that an experimental approach in a real context found the effects of loud music on alcohol consumption.”

To arrive at their finding, the researchers discretely visited two bars for three Saturday evenings in a medium-sized French city. The study subjects, 40 males aged between 18 and 25, were unaware that they were being observed. With permission from the bar owners, the observers would randomly manipulate the sound levels (either 72 dB, considered normal, or 88 dB, considered high) of the Top 40 music in the bar and record the subject’s alcohol consumption. The results showed that high sound levels led to increased drinking, within a decreased amount of time.

Guéguen and his colleagues offer two hypotheses for why this increased consumption occurred. “One, in agreement with previous research on music, food and drink, high sound levels may have caused higher arousal, which led the subjects to drink faster and to order more drinks,” said Guéguen. “Two, loud music may have had a negative effect on social interaction in the bar, so that patrons drank more because they talked less.”

Related:
Alcohol: The Chemistry Of The Dark Side
Drink-Up For Superior Sperm

WARNING: Consumption of Alcohol May Leave You Wondering What.. Shot Glass New

Warning Alcohol Consumption Will May You Believe You're Whispering Metal Sign