You are here: Home › News › Graphene’s “Muffin-Tin” Nanodots Explained
By Will Parker on April 29, 2008 in News 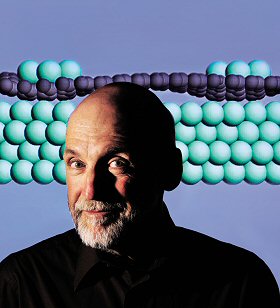 Researchers believe they now understand how graphene – a featureless, one-atom-thick sheet of carbon atoms – lying on an equally featureless iridium surface, self-created a kind of “muffin tin” that formed identically sized and spaced muffins out of applied iridium atoms. “At the outset,” writes Sandia researcher Peter Feibelman, who devised the explanatory simulation published in Physical Review B, “this seemed quite a mystery.”

This orderly nanoscopic arrangement could have numerous applications, Feibelman says. “The rigorous periodicity of the nanodot arrays is a huge advantage compared to amorphous or ‘glassy’ arrangements where everything has to be described statistically,” he explained. For example, similar quantum dot arrangements on graphene could keep information packets separate and “addressable” for data storage, or provide a ready-made environment for quantum computing.