You are here: Home › News › Physicists Mull Big Bang Detritus
By Will Parker on October 26, 2007 in News 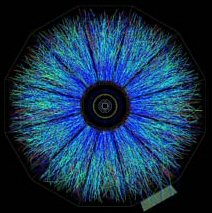 Physicists from the Institute of Physics of Cantabria (IFCA) and the University of Cambridge may have discovered an example of a cosmic defect, a remnant from the Big Bang called a “texture”. Reported in Science, the discovery could provide dramatic new insights into how the universe evolved following the Big Bang.

Professor Neil Turok of Cambridge’s Department of Applied Mathematics and Theoretical Physics first showed how textures – defects in the structure of the vacuum left over from the hot early universe – could form in the 1990s, highlighting that some would survive from the Big Bang and should be visible in today’s universe. Textures can be observed by the hot and cold spots they create in the cosmic microwave background radiation which fills the universe.

Big Bang theory says that the cosmos began in a very high density, high temperature state, cooling as it expands.

In the early hot universe, physicists believe that the different types of elementary particle (particles such as a quark from which larger particles are created) behaved identically. As the universe cooled, the vacuum changed and the symmetry between the particles was broken, in a phase transition analogous to the freezing of water.

It is believed that textures collapse and unwind on progressively larger scales, creating intense energy as well as gravitational potential. This unwinding also creates areas of extreme cold or hot, such as the very cold spot in the South Galactic Hemisphere discovered by the IFCA team in 2004. The IFCA pursued numerous possibilities for the existence of the cold spot. In particular, they thoroughly explored the possibility of being due to systematic effects, foreground contamination from our own galaxy or due to the scattering of cosmic microwave background radiation by large galaxy clusters.

But each time they came to the same conclusion: there were not any convincing arguments for any of these possibilities. They also hypothesized that it could be a texture and with the assistance of Dr Mike Hobson, a member of the Astrophysics Group at Cambridge’s Cavendish Laboratory, and Professor Neil Turok, they were able to examine this possibility in detail.

The researchers note that the cold spot in the image of the cosmic microwave background taken by the WMAP satellite is a very puzzling feature that has attracted a lot of attention in the cosmological community, but has not as yet been convincingly explained. “The possibility that this is a texture is very exciting,” said Professor Turok. “If it is, it will revolutionize our understanding of how the fundamental symmetries between the particles and forces were broken as the universe emerged from the big bang. The current data is suggestive but not yet compelling. There are a number of follow-up tests which can be made with future data. It’s a very testable hypothesis and we will know the answer within the next decade.”