You are here: Home › News › Chernobyl Fungus Feeds On Radiation
By Will Parker on May 23, 2007 in News 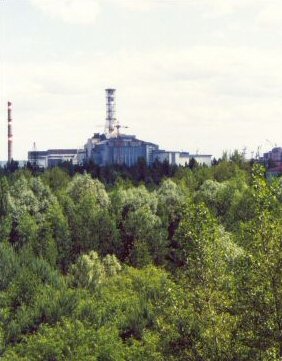 Researchers at the Albert Einstein College of Medicine (AEC) have found evidence that certain fungi possess another talent beyond their ability to decompose matter: the capacity to use radioactivity as an energy source for making food and spurring their growth.

Detailing the research in Public Library of Science ONE, AEC’s Arturo Casadevall said his interest was piqued five years ago when he read about how a robot sent into the still-highly-radioactive Chernobyl reactor had returned with samples of black, melanin-rich fungi that were growing on the ruined reactor’s walls. “I found that very interesting and began discussing with colleagues whether these fungi might be using the radiation emissions as an energy source,” explained Casadevall.

Casadevall and his co-researchers then set about performing a variety of tests using several different fungi. Two types – one that was induced to make melanin (Crytococcus neoformans) and another that naturally contains it (Wangiella dermatitidis) – were exposed to levels of ionizing radiation approximately 500 times higher than background levels.

Both of these melanin-containing species grew significantly faster than when exposed to standard background radiation.

“Just as the pigment chlorophyll converts sunlight into chemical energy that allows green plants to live and grow, our research suggests that melanin can use a different portion of the electromagnetic spectrum – ionizing radiation – to benefit the fungi containing it,” said co-researcher Ekaterina Dadachova.

Investigating further, the researchers measured the electron spin resonance signal after melanin was exposed to ionizing radiation and found that radiation interacts with melanin to alter its electron structure. This, they believe, is an essential step for capturing radiation and converting it into a different form of energy to make food. Until now, melanin’s biological role in fungi – if any – had been a mystery. Interestingly, the melanin in fungi is no different chemically from the melanin in our skin, leading Casadevall to speculate that melanin could be providing energy to skin cells.

And radiation-munching fungi could be on the menu for future space missions. “Since ionizing radiation is prevalent in outer space, astronauts might be able to rely on fungi as an inexhaustible food source on long missions or for colonizing other planets,” noted Dadachova.

Related articles:
Exotic Underground Bacteria Thrive On Radiation Rather Than Sunlight
Martian Dreaming
Chernobyl: No People But A Thriving Ecosystem

Liver, not brain, may originate Alzheimer’s