You are here: Home › News › That’s Cool: A Flotilla Of Parasols In Space
By Will Parker on November 6, 2006 in News 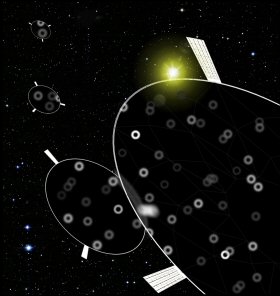 Climate change and global warming tend to be thought of as relatively slow processes when measured on the human time-scale. But some scientists believe that abrupt climate change is very possible and that we should start planning now on how to respond to a global warming crisis that might develop in decades, rather than centuries.

Roger Angel, a University of Arizona boffin in the field of astronomical adaptive optics, has been looking at ways to cool the Earth in just such an emergency.

Chiefly, he’s been studying the practicality of deploying shade devices in space to shield the Earth from the Sun’s radiation. NASA thought the idea had potential and funded him six months ago to develop the concept further. Now, his first paper on the idea has been published in the Proceedings of the National Academy of Sciences.

Angel’s plan involves launching a flotilla of trillions of small free-flying spacecraft a million miles above Earth into an orbit aligned with the sun, called the L1 Lagrange orbit. The spacecraft would form a long, cylindrical cloud about 4,000 miles in diameter and 60,000 miles in length. About 10 percent of the sunlight passing through the length of the cloud would be diverted away from Earth, uniformly reducing sunlight by about 2 percent over the entire planet. Enough to balance the heating caused by a doubling of atmospheric carbon dioxide in Earth’s atmosphere, believes Angel.

A space shade to deflect sunlight from Earth was first proposed by James Early of the Lawrence Livermore National Laboratory in 1989. “The earlier ideas were for bigger, heavier structures that would have needed manufacture and launch from the moon, which is pretty futuristic,” Angel explained. “I wanted to make the sunshade from small, light and extremely thin spacecraft that could be completely assembled and launched from Earth, in stacks of a million at a time. When they reached L1, they would be dealt off the stack into a cloud. There’s nothing to assemble in space.”

The lightweight spacecraft mooted by Angel would be made of a transparent film pierced with small holes. Each craft would be two feet in diameter, 1/5000 of an inch thick and weigh about a gram, the same as a large butterfly. The craft would use tiny, maneuverable solar sails to stay in position. Angel has calculated that the total mass of all the fliers would be around 20 million tons, making launch by conventional chemical rocket prohibitively expensive. Instead, Angel proposes using electromagnetic space launchers, which could bring the launch cost down to as little as $20 a pound.

Once in space, the craft would be steered to their orbit by solar-powered ion propulsion, a method pioneered by the European Space Agency’s SMART-1 moon orbiter. “The concept builds on existing technologies,” Angel said. “It seems feasible that it could be developed and deployed in about 25 years at a cost of a few trillion dollars. The solar shade should last about 50 years, so the average cost is about $100 billion a year, or about two-tenths of one percent of the global domestic product. [It’s] no substitute for developing renewable energy, the only permanent solution, but if the planet gets into an abrupt climate crisis that can only be fixed by cooling, it would be good to be ready with some shading solutions that have been worked out.”