You are here: Home › News › Black Holes A Cosmic Contraceptive?
By Will Parker on October 2, 2006 in News 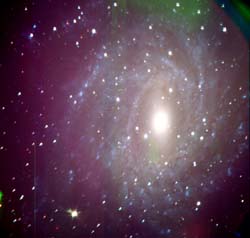 But in this new research, appearing in the Astrophysical Journal, astronomers using the Gemini telescope in Chile reported that many of the largest galaxies in the universe had a very low stellar birth rate, even when the universe was only about 20 percent of its present age. The study was conducted using Gemini’s Near Infrared Spectrograph, which analyzed the light of distant galaxies simultaneously over many different wavelengths. The researchers studied 20 galaxies so distant that their light had been traveling for nearly 11 billion years, or 80 percent of the age of the universe.

“The unexpected finding is what was not found – ionized hydrogen, the tell-tale signature of star birth. Remarkably, for nine of the twenty galaxies that we observed, this signature is not seen at all,” said researcher Pieter van Dokkum. “It gives a firm limit on the stellar birth rate in these objects.”

“Our new results imply that the stars in many large galaxies were born when the universe was in its infancy, in the first few billion years after the big bang,” added research leader Mariska Kriek. “The results confirm what some astronomers had suspected – galaxies seem to have some method of birth control that is very effective.”

The new study adds weight to the idea that in big galaxies, the formation of new stars was significantly suppressed after an initial period of very vigorous activity. “These galaxies had a very violent early youth, but rose into stable adulthood well before many galaxies like the Milky Way were even in kindergarten,” explained Kriek.

One possibility behind the low birth rate is that enormous black holes in the centers of large galaxies may be responsible for suppressing star formation. It’s speculated that the huge amounts of energy released from a black hole may dilute interstellar gas sufficiently to prevent future star birth. “Evidence for the presence of these black holes is seen in several of the galaxies studied, lending support to the idea that black holes serve as cosmic contraceptives,” said van Dokkum.