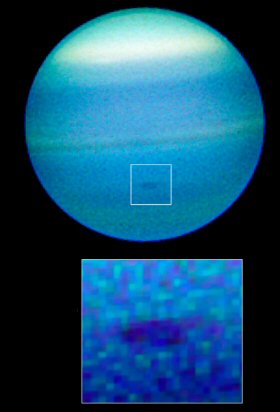 While rare on Uranus, dark spots have been frequently observed on Neptune. It was believed that while Uranus is similar in size and atmospheric composition to Neptune, it did not have such an active atmosphere. Lawrence Sromovsky, who led the team that took the pictures, said that recently, however, Uranus’s atmosphere had shown an unusual increase in activity.

The dark spot may be linked to the upcoming (2007) Uranian northern spring, when the sun will shine directly over the Uranian equator. “We have hypothesized that Uranus might become more Neptune-like as it approached its equinox,” said team member Heidi B. Hammel. “The sudden appearance of this unusual dark feature suggests we might be right.”

The disturbance was detected at a latitude of 27 degrees in Uranus’s northern hemisphere, which is just now becoming fully exposed to sunlight after decades of being in shadow (Uranus takes 84 years to orbit the sun). How Uranus responds to seasonal sunlight changes is of great interest to astronomers as Uranus’s sideways orientation (its rotation axis is tilted almost parallel to its orbital plane, such that the planet appears to be rotating on its side) could produce more unusual atmospheric phenomena.

The outer-oratory within a solemn atmosphere, The Meiji Shrine - Tokyo, Japan