You are here: Home › News › Forget The Thermometer, The Mercury Really Is Rising
By Will Parker on August 22, 2006 in News 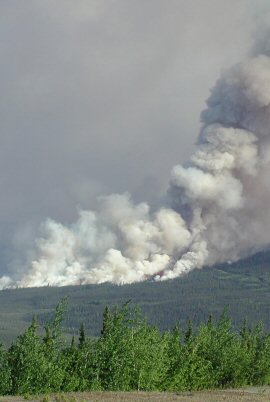 The wide range of detrimental flow-on effects triggered by climate change continues to surprise scientists. An article in the latest issue ofGeophysical Research Letters reveals how climate change appears to be contributing to the release of high levels of mercury in the northern wetlands of North America. The new report was compiled by Michigan State University (MSU) researcher Merritt Turetsky, working closely with the U.S. Geological Survey.

Humans have been releasing mercury into the atmosphere since the start of the Industrial Revolution.

Eventually, it falls back to Earth – more often than not in North American wetland areas – where it is sequestered by the peat soils. While mercury is poisonous and ideally not something you’d really want in wetlands; the cold, wet soils of the boreal forest region in Alaska and northern Canada are in fact efficient resting places for mercury. “This type of wetland is actually doing us a service. Peat lands have been storing mercury from the atmosphere since well before and during the Industrial Revolution, locking it in peat where it’s not causing any biological harm, away from the food web,” explained Turetsky.

To compile the report, Turestsky and his co-researchers measured the amount of mercury stored in soils and vegetation of forests and peat lands; then used historical burn areas and emission models to estimate how much of that mercury is released into the atmosphere during fires. The researchers also sampled smoke plumes to measure atmospheric mercury levels as fires burnt.

The findings indicate that the drier conditions brought about by a warming climate will cause the soil to relinquish its hold on hundreds of years of mercury accumulation, sending that mercury back into the air at levels up to 15 times greater than originally calculated. “While peat lands are typically viewed as very wet and stagnant places, they do burn in continental regions, especially late in the season when water tables are depressed,” explained Turetsky. “When peat lands burn, they can release a huge amount of mercury that overwhelms regional atmospheric emissions. Our study is new in that it looks to the soil record to tell us what happens when peat soil burns, soil that has been like a sponge for mercury for a long time.”

“Environmental mercury is just like a thermometer. Levels will rise in the atmosphere with climate change, but due to increasing fire activity in the north and not solely due to warming,” said Jennifer Harden, a soil scientist at the U.S. Geological Survey and co-author of the study. “We’re talking about mercury that has been relatively harmless, trapped in peat for hundreds of years, rapidly being spewed back into the air,” Turetsky added. “Some of it will fall into lakes and streams where it could become toxic in food chains. Our findings show us that climate change is complex and will contribute to the pollution of food chains that are very far away from us.”