You are here: Home › News › Global Warming Behind Early Primate Diaspora?
By Will Parker on July 17, 2006 in News 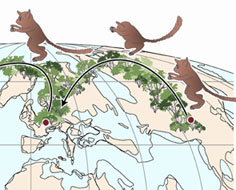 Exactly what prompted early primates to travel between continents 55 million years ago has perplexed scientists for years. And there are at least 4 different scenarios supposed to explain how primates “simultaneously” popped into existence in Asia, Europe and North America. Now, a collaborative study involving researchers from the University of Michigan (U-M), Johns Hopkins University School of Medicine and the Royal Belgian Institute of Natural Sciences has revealed a new explanation for early primate movements: rapid global warming.

In the July 25 edition of the Proceedings of the National Academy of Science, researchers describe how they used recently discovered evidence to make highly accurate comparisons between prevailing primate migratory hypotheses. The researchers focused on the ancient and oldest known primate genus called Teilhardina, which resembled contemporary primates known as tarsiers. Scientists consider Teilhardina to have been a true primate – or euprimate – just like tarsiers, monkeys, apes and humans.

But the researchers found that none of the hypotheses measured up. They showed that primates not only traveled a different migration route to those suggested, but that they moved as a result of rapid global warming. The team proposed that Teilhardina began in South Asia and spread to Europe by crossing an ancient seaway called the Turgai Straits, and then migrated to North America through Greenland.

The team arrived at their unusual account of primate dispersion by using a carbon isotope curve based on readings from all three continents. The curve represents carbon ratios present in the atmosphere, earth and living organisms. These carbon ratios are an important marker, as levels differ over the years depending upon the proportion of carbon-12 and carbon-13 present. A flood of carbon-12, for example, is associated with the arrival of the Paleocene-Eocene thermal maximum, which represents one of the most dramatic global warming events ever recorded.

The carbon isotope curve pinpointed the arrival of Teilhardina to the 3 continents in relation to the flood of carbon-12. The arrival of Teilhardina in Asia was found to precede the maximum flood of carbon-12, coincided with it in Europe, and appeared just after the maximum in North America. Using this evidence, the researchers mapped out the new migratory pattern, and deduced that Teilhardina migration was initiated by rapid global warming. The researchers also added that the entire primate dispersal event would have occurred within the astonishingly short timeframe of approximately 25,000 years.

“It is remarkable to be able to study evolutionary events so deep in the past with such precision,” said Gingerich, who is the Ermine Cowles Case Collegiate Professor of Paleontology and director of the U-M Museum of Paleontology. “The speed of dispersal and the speed of evolutionary change during dispersal are near the maximum for such rates observed today, and the rapid change and dispersal were almost certainly driven by profound greenhouse warming at the Paleocene-Eocene boundary.”