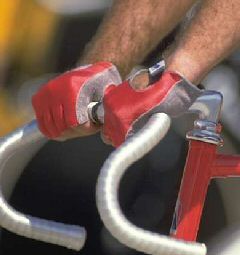 Researchers writing in the Journal of Applied Physiology have reported on some intriguing trials conducted at simulated high altitude with athletes who took the erectile dysfunction drug Viagra (no, not that sort of trial). It seems that Viagra improved the cardiovascular and exercise performance measures of the cyclists by up to 45 percent, although the effect seemed to be limited to around half the cyclists taking part.

Viagra (sildenafil citrate) was originally developed to relieve high blood pressure. It works by inhibiting phosphodiestrase-5, an enzyme which degrades cyclic guanosine monophosphate (cGMP), a cell messenger that causes the blood vessels to relax. By inhibiting the enzyme, the drug allows greater vasodilation and greater blood flow. Although the drug works in, ahem, different target sites, this study focused on the lungs.

The researchers, from the Palo Alto Health Care System and Stanford University, hypothesized that the drug would allow the study’s participants to improve their performance at altitude because it would reduce the constriction of vessels in the lungs that sometimes occurs at altitude. In turn, that would allow greater blood flow through the heart, better transfer of oxygen from the lungs to the blood and improved oxygen delivery.

To gauge the effects of the drug, the cyclists performed a total of 10 cycling trials, with and without sildenafil at sea level and at a simulated altitude of 3,874 meters. Neither the participants nor the researchers knew whether the trial included a placebo or one of the two sildenafil doses, 50 mg or 100 mg.

Ten cyclists who took sildenafil at altitude collectively lowered the time it took to cover six kilometers by 15 percent compared to placebo. The cyclists also significantly improved stroke volume (the volume of blood moved out of one ventricle of the heart per beat) and cardiac output (stroke volume times heart rate) compared to the placebo.

But the effect was not consistent in all the cyclists who received sildenafil. Some of the cyclists achieved major gains while others improved much less, or not at all. The cyclists who did respond improved 39 percent in the time trial performance at altitude compared to their performance with a placebo. Some in the responder group improved by as much as 45 percent.

Researcher Anne L. Friedlander said that four of the 10 participants responded to sildenafil, while the remaining six did not. “One of the messages of the paper is that not everybody benefits,” she added. “Sildenafil could be considered as a treatment for those who suffer most at altitude but, because of side effects that can include severe headaches and the apparent inability to help some people, it should not be taken as an exercise aid by everyone.”

The team’s broader efforts are aimed at those who have to rapidly acclimatize to high altitude. Soldiers deployed to Afghanistan, for example, who must in short-order undertake physically taxing work at 12,000-14,000 feet, conditions that can severely affect performance under potentially life-threatening conditions. Friedlander said the next step was to do a study with women, to see if they react the same way to sildenafil and altitude. The researchers also want to take a closer look at sildenafil responders to see if they can identify ahead of time who will benefit from treatment.