You are here: Home › News › Motor Neurons Grown From Stem Cells
By Will Parker on January 31, 2005 in News 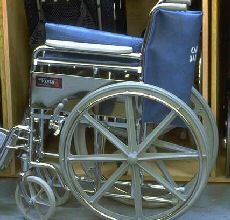 Motor neurons transmit messages from the brain and spinal cord, dictating almost every movement in the body from the wiggling of a toe to the rolling of an eyeball. The new development could one day help victims of spinal-cord injuries, or pave the way for novel treatments of degenerative diseases such as Lou Gehrig’s disease. With healthy cells grown in the lab, scientists could, in theory, replace dying motor neurons to restore function and alleviate the symptoms of disease or injury. Much closer to reality, the advance will allow researchers to create motor neuron modeling systems to screen new drugs, says study leader Su-Chun Zhang at the University of Wisconsin-Madison.

Scientists have long believed in the therapeutic promise of embryonic stem cells with their ability to replicate indefinitely and develop into any of the 220 different types of cells and tissues in the body. But researchers have struggled to convert blank-slate embryonic stem cells into motor neurons. The goal proved elusive even in simpler vertebrates such as mice, whose embryonic stem cells have been available to scientists for decades. One reason scientists have had difficulty making motor neurons, Zhang believes, may be that they are one of the earliest neural structures to emerge in a developing embryo. With the ticking clock of development in mind, Zhang and his team deduced that there is only a thin sliver of time – roughly the third and fourth week of human development – in which stem cells could be successfully prodded to transform themselves into spinal motor neurons.

In addition to the narrow time frame, it was also critical to expose the growing stem cells to an array of complex chemical cocktails. The cocktails constitute naturally secreted chemicals – a mix of growth factors and hormones – that provide the exact growing conditions needed to steer the cells down the correct developmental pathway. “You need to teach the embryonic stem cells to change step by step, where each step has different conditions and a strict window of time,” said Zhang. “Otherwise, it just won’t work.”

The discovery, says Zhang, demonstrates that human stem cells do not necessarily differentiate in linear fashion, as scientists always believed. Rather, a series of complex overlapping changes may well be the developmental norm in higher vertebrates such as humans. “We cannot simply translate studies from animal to humans.” The next step, Li says, will be to test if the newly generated neurons can communicate with other cells when transplanted into a living animal.