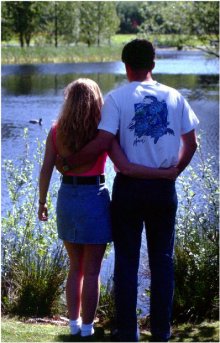 A new study of young mothers by researchers at University College London (UCL) has shown that romantic and maternal love activate many of the same specific regions of the brain, and lead to a suppression of neural activity associated with critical social assessment of other people and negative emotions. The findings suggest that once one is closely familiar with a person, the need to assess the character and personality of that person is reduced, and bring us closer to explaining why, in neurological terms, love makes us blind. In the experiment, published in NeuroImage, the brains of 20 young mothers were scanned while they viewed pictures of their own children, children they were acquainted with, and adult friends, to control for feelings of familiarity and friendship (the brain regions involved in romantic love having been identified by the authors in an earlier study).

The similarity of the activity recorded in this study compared to those obtained in the earlier study was striking; with activity in several regions of the brain overlapping precisely in the two studies. In summary, the findings showed that both types of love activate specific regions in the reward system, while reducing activity in the systems necessary for making negative judgements.

The new results demonstrated also that the mechanisms of love are similar in animals and humans, and that the brain regions activated are the same ones as respond to the brain-produced drugs oxytocin and vasopressin. These neuro-hormones have been shown in animals to be both sufficient and necessary to induce both mother-infant bonding and male-female bonding. The new research therefore provides a link to the previous work on animals, showing that the same ‘love-potion’, produced by the brain, known to work in animals is also at work in humans.

“Both romantic and maternal love are highly rewarding experiences that are linked to the perpetuation of the species, and consequently have a closely linked biological function of crucial evolutionary importance,” said Andreas Bartels, of UCL’s Department of Imaging Neuroscience. “Yet almost nothing is known about their neural correlates in the human.

“Our research enables us to conclude that human attachment employs a push-pull mechanism that overcomes social distance by deactivating networks used for critical social assessment and negative emotions, while it bonds individuals through the involvement of the reward circuitry, explaining the power of love to motivate and exhilarate.”