You are here: Home › News › Lightning unleashes potent radiation cocktail
By Will Parker on December 8, 2009 in News 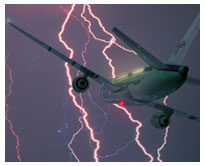 Physicists have estimated that air travelers could be exposed to a dose of X-rays, gamma rays and high-energy electrons equal to that from 400 chest X-rays if their plane happens to be near a lightning discharge. The scientists, from the Florida Institute of Technology, University of California, Santa Cruz and the University of Florida, say that commercial airplanes are typically struck by lightning once or twice a year.

The scientists caution that they did not measure radiation levels directly from aircraft, instead estimating radiation based on satellite and ground-based observations of X-rays and gamma rays. The observations included those made from satellites of terrestrial gamma-ray flashes (TGFs), mysterious phenomena that appear to originate within thunderstorms at the same altitudes used by jet airliners. They also included measurements of X-rays and gamma rays from lightning on the ground, as well as artificial lightning triggered with wire-trailing rockets fired into storm clouds.

Writing in the journal Atmospheres, the scientists say the radiation in a football field-sized space around lightning events could reach “biologically significant levels,” up to 10 rem. “If an aircraft happened to be in or near the high-field region when either a lightning discharge or a TGF event is occurring, then the radiation dose received by passengers and crew members inside the aircraft could potentially approach 10 rem in less than one millisecond.”

Ten rem is considered the maximum safe radiation exposure over a person’s lifetime. It is equal to 400 chest X-rays, three CAT scans or 7,500 hours of flight time in normal conditions (all airplane passengers are exposed to slightly elevated radiation levels due to cosmic rays). While the research raises concerns, the scientists caution that they don’t know how often high-radiation events occur – or how often planes are nearby enough to expose passengers and flight crews to potential danger.

David Smith, an associate professor of physics at UC-Santa Cruz, said recent airborne research suggests high radiation incidents are rare. Flying aboard a research aircraft this past summer, Smith and several of the other researchers used a highly sophisticated instrument to measure gamma ray flashes from thunderstorms. Over the course of several flights, they were only able to detect one such flash, at a safe distance from the plane. “These observations show that although thunderstorms do occasionally create intense gamma-ray flashes, the chance of accidently being directly hit by one is small,” Smith said.

However, study co-author Martin Uman, from the University of Florida, said that because commercial planes are struck once-or-twice a year more inquiry is needed. He added that he would recommend to the Federal Aviation Administration that it place detectors aboard planes capable of measuring the storm-related, brief and intense radiation bursts to determine how often they occur. “What we need to do is supply the right kind of detectors to a lot of planes,” he said. “We also need to spend more time looking at gamma and x-ray radiation from lightning and thunderstorms and trying to understand how it works.”