You are here: Home › News › Antarctic Lakes May Harbor Unique Ecosystems
By Will Parker on December 5, 2001 in News 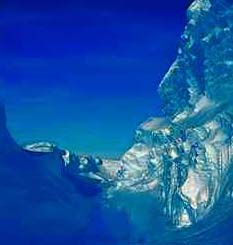 Liquid lakes buried thousands of meters below the Antarctic ice sheet are likely the home to unique habitats and creatures that thrive in them. Exploration of those lakes will therefore require extreme care and an international cooperative effort, according to a team of authors writing in the Dec. 6 issue of Nature. The pressure exerted by the continent-wide ice sheet together with heat generated by the Earth from below and the enormous insulating properties of the overlying ice sheet, may mean that liquid water exists in many — if not all — of the lakes. That may mean that they harbor life, according to a team of authors, led by Martin Siegert of Bristol University.

Microbiologists funded by the National Science Foundation (NSF), working with ice samples gathered from deep beneath Russia’s Vostok Station — that is thought to be refrozen water from Lake Vostok itself — have argued that microbes may survive in extreme cold and darkness under more than 4,000 meters of ice. John Priscu of Montana State University, one of those NSF-funded biologists, is a co-author of the paper.

Antarctica is home to more than 70 lakes that lie thousands of meters under the ice sheet. The lakes include one under the South Pole and another, Lake Vostok, deep in the Antarctic interior, that is comparable in size and depth to one of the North American Great Lakes.

Given the conditions in the lakes, the authors state, it is reasonable to believe “that subglacial lakes house a variety of microorganisms potentially unique to subglacial Antarctica and, if they are isolated hydrologically, unique to each lake.”

In the Nature article, Priscu and his colleagues also argue that the sediments at the bottom of Lake Vostok, and in other lakes, may also sustain life.

They caution, though, that developing both the technology and the experimental protocols to explore those lakes without contaminating the waters or harming any microbial communities that may exist there will be an extremely complex undertaking that will require “significant multinational cooperation.”

The United States Antarctic Program, which is managed by NSF and which coordinates almost all U.S. research in Antarctica, already has taken some non-invasive steps to explore Lake Vostok. During the 2000-2001 research season, researchers from the Lamont-Doherty Earth Observatory at Columbia University conducted detailed airborne radar mapping of the lake to more thoroughly understand its physical and geographical boundaries.

In 1999, two NSF-funded teams, one headed by Priscu and another headed by David Karl of the University of Hawaii, published papers in Science describing evidence that viable microbes lived in the “accreted,” or melted and refrozen ice from Lake Vostok.

Priscu and his co-authors write in the Nature article that these investigations into the nature of Lake Vostok “have helped to define the next generation of research objectives, and it is likely that several exciting bio-geochemical-physical systems wil be documented during the next decade.”

Recognizing the scientific and technological challenges and opportunities of such an undertaking, NSF’s Office of Polar Programs has established an NSF committee to study the possible scientific exploration of the lakes.

Karl Erb, who heads the U.S. Antarctic Program, cautioned committee members that future workshops to discuss whether and how to proceed with scientific exploration will need to explore how advanced technologies, including technologies that may as yet not be developed, can enable scientists to achieve their research goals. He noted that the workshops will “bring out the likely interplay between science goals and technology requirements: The goals should define the requirements but the state of the technology may proscribe the goals.”

He also adds that any scientific exploration of subglacial lakes, including Lake Vostok, should include international and interagency participation.