You are here: Home › Humans › News › Researchers reveal how emotions are mapped in the body
By Will Parker on January 1, 2014 in Humans, News 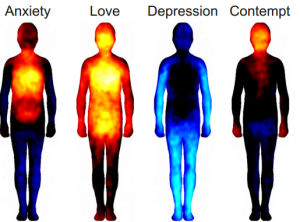 Emotions affect not only our mental state, but also different areas of the body. These conscious feelings help individuals fine-tune their behavior to better match the challenges of the environment. Anxiety may be experienced as pain in the chest, for example, whereas falling in love may be associated with warm sensations all over the body. It is thought that this activation of body areas gets us ready to react swiftly to dangers, or pleasurable opportunities, present in the environment around us.

Now, researchers at Aalto University (Finland) have mapped a variety of different emotions and the corresponding areas of the body that are activated. The scientists are investigating whether our emotions trigger these bodily changes, or if it is our perceptionof these bodily changes that generates the felt emotions. Their research appears in theProceedings of The National Academy of Sciences.

Team member Lauri Nummenmaa said over 700 individuals from Finland, Sweden, and Taiwan took part in the study. He also noted that the sensation patterns his team recorded were consistent across all subjects, reinforcing the notion that emotional sensation patterns have a biological basis.

“Our data highlight that consistent patterns of bodily sensations are associated with each of the six basic emotions, and that these sensations are represented in a categorical manner in the body. [They] are in line with the evidence from brain imaging and behavioral studies, highlighting categorical structure of emotion systems and neural circuits supporting emotional processing,” said Nummenmaa. The study indicates that most basic emotions were associated with sensations of elevated activity in the upper chest area, likely corresponding to changes in breathing and heart rate. Similarly, sensations in the head area were shared across all emotions, reflecting both physiological changes in the facial area (i.e., facial musculature activation, skin temperature) as well as the felt changes in the contents of mind triggered by the emotional events. Sensations in the upper limbs were most prominent in approach-oriented emotions, anger and happiness, whereas sensations of decreased limb activity were a defining feature of sadness. Sensations in the digestive system and around the throat region were mainly found in disgust. Nummenmaa said the findings have major implications for our understanding of the functions of emotions and their bodily basis. “These results thus support models assuming that somatosensation and embodiment play critical roles in emotional processing. Unraveling the subjective bodily sensations associated with human emotions may help us to better understand mood disorders such as depression and anxiety, and could thus provide a novel biomarker for emotional disorders.”

Testosterone enhances desire to sing, but not song quality
The entropy of nations