You are here: Home › News › Nano-mechanical sensors “wired” using photonics
By Will Parker on April 27, 2009 in News 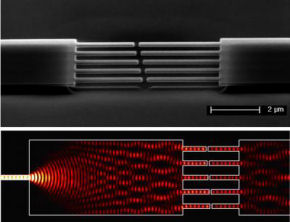 Yale researchers have demonstrated silicon-based nano-cantilevers, smaller than the wavelength of light, that operate on photonic principles eliminating the need for electric transducers and expensive laser setups. The work, reported in Nature Nanotechnology, should usher in a new generation of tools for ultra-sensitive measurements at the atomic level.

In nanoelectromechanical systems, cantilevers are the most fundamental mechanical sensors. These tiny structures – fixed at one end and free at the other – act like nano-scale diving boards that “bend” when molecules “jump” on them and register a change that can be measured and calibrated. The new work shows how these structures can be improved by using integrated photonics to sense the cantilever motion.

“The system we developed is the most sensitive available that works at room temperature. Previously this level of sensitivity could only be achieved at extreme low temperatures,” said researcher Hong Tang. The new system can detect as little deflection in the nano-cantilever sensors as 0.0001 angstroms – one ten thousandth of the size of an atom

To detect this tiny motion, Tang’s team devised a photonic structure to guide the light wave through a cantilever. After exiting from the free end of the cantilever, the light tunnels through a nanometer gap and is collected on chip. “Detecting the lightwave after this evanescent tunneling,” says Tang, “gives the unprecedented sensitivity.”

Tang’s paper also details the construction of a sensor multiplex – a parallel array of 10 nano-cantilevers integrated on a single photonic wire. Each cantilever is a different length, like a key on a xylophone, so when one is displaced it registers its own distinctive “note.” “A multiplex format lets us make more complex measurements of patterns simultaneously – like a tune with chords instead of single notes,” said co-researcher Mo Li. At the heart of this breakthrough is the novel way Tang’s group “wired” the sensors with light. Their technique is not limited by the bandwidth constraints of electrical methods or the diffraction limits of light sources.

“We don’t need a laser to operate these devices,” noted Wolfram Pernice, a co-author of the group’s researcher paper. “Very cheap LEDs will suffice.” Futhermore, the LED light sources – like the million LED pixels that make up a laptop computer screen – can be scaled in size to integrate into a nanophotonic-chip – an important feature for this application.

“This development points to a future of compact, robust and scalable systems with high sensitivity that will find a wide range of future applications – from chemical and biological sensing to optical signal processing,” said Tang.