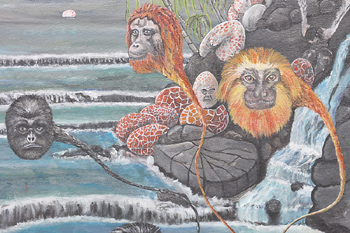 Scientists from the University of Bath have revealed what may well be the first ‘rule’ of evolution – a pervasive drive for organisms to become increasingly more complex. Reporting their findings in the Proceedings of the National Academy of Sciences, the researchers looked back through the last 550 million years of the fossil catalogue to the present day, investigating the different evolutionary branches of the crustacean family tree.

“If you start with the simplest possible animal body, then there’s only one direction to evolve in – you have to become more complex,” said Dr Matthew Wills from the Department of Biology & Biochemistry at the University of Bath. “Sooner or later, however, you reach a level of complexity where it’s possible to go backwards and become simpler again. What’s astonishing is that hardly any crustaceans have taken this backwards route. Instead, almost all branches have evolved in the same direction, becoming more complex in parallel. This is the nearest thing to a pervasive evolutionary rule that’s been found.”

Wills admitted that there were exceptions, typically from animals living in remote habitats such as isolated marine caves. “[But] for those free-living animals in the ‘rat-race’ of evolution, it seems that competition may be the driving force behind the trend. What’s new about our results is that they show us how this increase in complexity has occurred. Strikingly, it looks far more like a disciplined march than a milling crowd,” he said.

While previous research established increasing morphological complexity in the fossil record, this pattern was thought to occur due to the chance origination of a few new types of animals. The new study, however, shows that complexity has evolved numerous times independently across different animal groups on the “Tree of Life.”

Explaining his own group’s findings, Wills noted that like all arthropods, crustaceans’ bodies are built up of repeating segments. In the simplest crustaceans, the segments are quite similar – one after the other. In the most complex, such as shrimps and lobsters, almost every segment is different, bearing antennae, jaws, claws, walking legs, paddles and gills. “Those crustacean groups going extinct tended to be less complex than the others around at the time,” said Wills. “There’s even a link between average complexity within a group and the number of species alive today.”