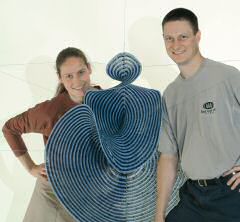 The mathematics journal Mathematical Intelligencer has published some intriguing instructions on how to crochet your very own model of chaos. Hinke Osinga and Bernd Krauskopf – both of Bristol University’s Department of Engineering Mathematics – have turned the Lorenz equations that describe the nature of chaotic systems into a real-life object, by crocheting computer-generated instructions.

“Imagine a leaf floating in a turbulent river and consider how it passes either to the left or to the right around a rock somewhere downstream. Those special leaves that end up clinging to the rock must have followed a very unique path in the water. Each stitch in the crochet pattern represents a single point [a leaf] that ends up at the rock,” said Osinga (left of picture).

Together all the points (stitches) define a complicated surface, according to the Lorenz equations. Osinga and Krauskopf have developed a method to describe such surfaces using a computer. After months of staring at animations on a screen, they suddenly realised that in fact their computations had naturally generated crochet instructions. Osinga, who learnt to crochet at the age of seven, took up the challenge. “The computer-generated crochet instructions were remarkable. Simply by looking at the real-life surface I would never have designed it the way the computer did. After all those months of trying to create it on screen, it was fascinating to see the surface grow under my own hands,” she said. “And it was truly amazing to see a floppy object fall into its desired shape when it was mounted with steel wire,” Krauskopf added.

The final result took Osinga about 85 hours to complete and contains 25,511 crochet stitches.

Crochet your own Lorenz manifold at www.enm.bris.ac.uk/anm/preprints/2004r03.html