You are here: Home › News › Speed freaks aim to tame Bloodhound car’s ground-based sonic boom
By Will Parker on October 24, 2008 in News 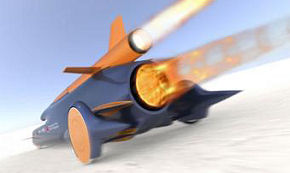 Using computational fluid dynamics (CFD), an aerodynamics team at Swansea University in the UK is playing a vital role in the development of the 1,000 mph Bloodhound Supersonic Car (SSC). “From the nose to the tail, anything that has any kind of aerodynamic influence we are modeling,” says researcher Dr. Ben Evans. “It’s the kind of thing aerospace engineers would have traditionally done in a wind tunnel, but we’re doing it on a big multi-processor super computer. Wind tunnels have massive limitations. Bloodhound SSC is a car, so it’s rolling on the ground and there are no wind tunnels in existence where you can simulate a rolling ground with a car traveling faster than mach one.”

This “mach factor” is the major difference between this vehicle and its predecessor, Thrust SSC. Thrust SSC was a supersonic car in that it crossed the sound barrier and was supersonic for a matter of seconds. But with Bloodhound, the target speed is 1,000mph – mach 1.4. It will be supersonic far beyond mach one, and for a much longer time period, which means the supersonic shockwaves it creates will be far stronger than Thrust SSC, and they will interact with the car and the desert floor for much longer.

“Once you start approaching, and go beyond the speed of sound, you can no longer send a pressure wave forward to tell the air ahead of you you’re coming,” explained Evans. “What happens is a big pressure wall builds up in front of you. Rather than air slowly and smoothly getting out of the way, at supersonic speeds these changes happen very suddenly in a shockwave. What we’re trying to understand is what happens when this shockwave interacts with a solid surface which is a matter of centimeters away.”

What the team do know is this “interaction” creates a phenomenon known as “spray drag” – a term first coined by Bloodhound team member and aerodynamicist Ron Ayers during the Thrust SSC attempts. Spray drag is an additional drag component not accounted for in aerodynamic or rolling resistance theory.

“As the car interacts with the desert, and the shockwaves interact with the desert, they actually eat up the desert floor,” says Evans. “That introduces sand particles into the aerodynamic flow around the car and this interaction is not accounted for in standard CFD work. We plan to look at this spray drag phenomena, what happens and when, and how the sand particles impinge on the car.”

“We want a nose [on the car] that constantly generates a small down force on the front to help keep the car on the ground. But we’re also constantly looking a how we can minimize spray drag and if we can constantly achieve a positive pressure on the desert surface leading up to the front wheels then hopefully the surface will remain intact until the front wheels roll over it.”

In time, the research could lead to better vehicle or aircraft design, improved fuel efficiencies, and even new medical techniques. “There are the obvious applications in aerospace, but any application you can think of that involves fluid flow can be modeled using CFD. Some of my university colleagues are working on blood flow monitoring through the arterial system and trying to predict when aneurysms will explode through pressure loadings. Biomechanical systems seem to be one of the areas CFD is being applied to now.”

First human communities may have originated from funeral feasts