You are here: Home › News › Worry Fuel › Lab study suggests mad cow disease can be transmitted by plants
By Will Parker on May 15, 2015 in News, Worry Fuel 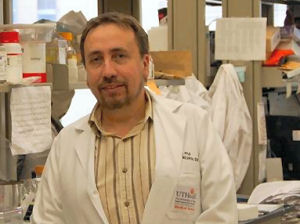 A study appearing in the latest issue of Cell Reports suggests that grass plants can bind, uptake, and transport infectious prions. The researchers, from The University of Texas Health Science Center at Houston, say that plants may play an important role in environmental prion contamination.

CWD, first diagnosed in mule deer in Colorado in the late 1960s, has spread across the country into 22 states, according to the CDC. In northeastern Colorado and southeastern Wyoming, the disease is endemic. The team, led by professor of neurology Claudio Soto (pictured), sought to find out why.

Soto’s team analyzed the retention of infectious prion protein and infectivity in wheat grass roots and leaves incubated with prion-contaminated brain material and discovered that even highly diluted amounts can bind to the roots and leaves.

When the wheat grass was consumed by hamsters, the animals were infected with the disease. The team also learned that infectious prion proteins could be detected in plants exposed to urine and feces from prion-infected hamsters and deer.

Researchers also found that plants can uptake prions from contaminated soil and transport them to different parts of the plant, which can act as a carrier of infectivity. This suggests that plants may play an important role in environmental prion contamination and the horizontal transmission of the disease.

The findings were made in a controlled setting, but Soto now plans to explore actual ecosystems. “This research was done in experimental conditions in the lab,” he said. “We’re moving the research into environmental contamination now.”