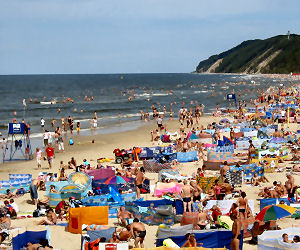 “Our study identified an organic pathway encoded in skin whereby UV radiation causes the synthesis and release of beta-endorphin and produces opiate-like effects, including addictive behavior,” says study leader David E. Fisher. “This provides a potential explanation for the ‘sun seeking’ behavior that may underlie the relentless rise in most forms of skin cancer.”

Past studies – particularly those with subjects who use indoor tanning facilities – have found evidence of addiction-like behavior. For example, frequent tanners were somehow able to tell the difference between tanning beds using UV radiation and those delivering non-UV light. Other studies found that administration of an opioid blocker produced withdrawal-like symptoms in frequent tanners, implying but not proving that something had been regularly activating opioid pathways.

Fisher explained that part of skin’s natural response to UV light is production of a protein called POMC, which is then clipped into several smaller fragments, one of which induces production of the pigment melanin. Processing of another segment of POMC leads to generation of beta-endorphin in the skin. The current study was designed to investigate whether this UV-induced beta-endorphin produces opioid-like effects such as pain relief and dependency.

For the study, the investigators delivered a daily dose of UV light – equivalent to the exposure of fair-skinned humans to 20 to 30 minutes of midday Miami sun – on the shaved backs of a group of mice for 6 weeks.

The dose was calculated to induce tanning but not burning of the animals’ skin. Within a week of the first UV exposure, the animals’ blood beta-endorphin levels rose significantly, remaining elevated during the study period and gradually returning to normal after UV exposure was discontinued.

Tests conducted at regular intervals during the study period showed that the UV-treated animals were less responsive to light touch or temperature changes than a control group with no UV exposure. The higher the animals’ beta-endorphin levels, the less sensitive they became. But administration of naloxone, which would broadly block opioid-pathway activity, returned skin sensation back to normal in the UV-treated animals.

In UV-habituated animals, naloxone treatment also produced classic symptoms of opioid withdrawal, such as trembling, shaking and teeth chattering. And mice trained to associate the effects of naloxone with an environment they would naturally prefer – a dark box instead of a light box – invariably choose to enter the area where they had not experienced naloxone-produced symptoms. In contrast, a strain of mice in which production of POMC was selectively blocked in skin or which lacked the beta-endorphin gene altogether exhibited none of the responses or symptoms seen in normal mice after UV treatment, confirming the presence of a UV-activated opioid pathway in the skin.

“It is possible that a natural mechanism reinforcing UV-seeking behavior may have developed at certain stages of mammalian evolution through its contribution to the synthesis of vitamin D,” Fisher says. “But such behavioral effects would also carry the carcinogenic risks of UV light that we now recognize. Today’s alternative sources of vitamin D, such as inexpensive oral supplements, are both safer and more accurate in maintaining healthy vitamin D levels.”

Fisher also wonders whether this interaction of sun, skin and endorphins might be involved in other behaviors or disorders. “It may represent one of the earliest behavioral responses that can be considered addictive,” he suggested.

Related:
Discuss this article in our forum
The Race To Understand Skin Cancer
UV Damage To DNA Clocked
Cold weather and prostate cancer: what’s the connection?
Melanoma Not Without Benefits