You are here: Home › Health › Mental Health › News › Faulty eye signaling may be to blame for schizoid hallucinations
By Will Parker on July 29, 2013 in Mental Health, News 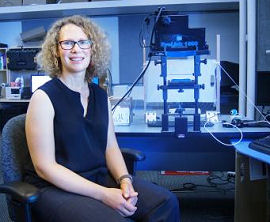 By observing the eye movements of schizophrenia patients while they played a simple video game, a University of British Columbia researcher has discovered a potential explanation for some of their symptoms.

Schizophrenia is a brain disorder affecting about one per cent of the population that often causes people to hear voices that others don’t hear or see things that others don’t see. People with schizophrenia often have poor motion perception and eye movements, leading them to bump into people while walking or making it a challenge to cross a street. They often cannot perform simple tasks like preparing a shopping list or reading a transportation map.

The new research, published in the Journal of Neuroscience, shows that compared to healthy subjects, schizophrenia patients had a harder time tracking a moving dot on a screen and predicting its trajectory. But the impairment of their eye movements was not severe enough to explain the difference in their predictive performance, suggesting a breakdown in their ability to interpret what they saw.

Lead researcher Miriam Spering (pictured) says the patients were having trouble generating or using an efference copy – a signal sent from the eye movement system in the brain indicating how much, and in what direction, their eyes have moved. The efference copy helps validate visual information from the eyes.

“An impaired ability to generate or interpret efference copies means the brain cannot correct an incomplete perception,” says Spering. “The brain might fill in the blanks by extrapolating from prior experience, contributing to psychotic symptoms, such as hallucinations.”

The new findings, according to Spering, indicate that schizophrenics could improve their visual processing deficit with simple exercises. “Just as a person might, through practice, improve their ability to predict the trajectory of a moving dot, a person might be able to improve their ability to generate or use that efference copy,” she explained. “My vision would be a mobile device that patients could use to practice that skill, so they could more easily do common tasks that involve motion perception, such as walking along a crowded sidewalk.”

Related:
Discuss this article in our forum
Schizophrenia created in a petri dish
Art therapy not so therapeutic for schizophrenics
Schizophrenic computer models mental illness
Epigenetic Changes Found In Schizophrenics