You are here: Home › Humans › News › Txting tested for battlefield comms
By Will Parker on June 2, 2013 in Humans, News 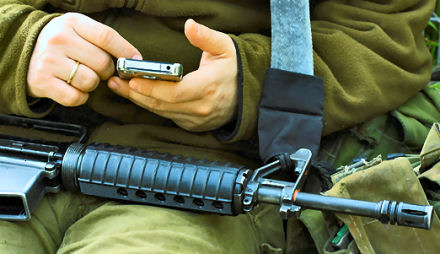 Radios, gunfire, explosions, and live voices all combine during combat to create extreme auditory overload for military personnel, but defense researchers think they may have a solution – the humble text message.

The use of text messages to improve command and control operations was explored recently by a team of researchers at Defence Research and Development Canada. Researcher Sharon Abel presented her team’s findings at the 21st International Congress on Acoustics, held this week in Montreal.

“In military operations, it’s critical that messages be monitored, encoded, responded to and relayed accurately, in a timely manner, to ensure situational awareness, personal safety, and mission success,” explained Abel. To test the value of adding a visual cue to the mix, the researchers ran two experiments.

First, they investigated the benefit of using visual cues to direct the listener’s attention to an audio channel delivering a target message. Inside a mock-up military land vehicle, participants were exposed to multiple messages over right and left earphones via headset, and loudspeakers. Variables included a background of quiet or vehicle noise, with and without babble noise that modeled surrounding conversations, and with and without visual cues.

For their second experiment, the team tested the benefits of instant messaging as a supplement to audio presentation of information by asking participants to engage in two tasks simultaneously. Participants listened to pairs of phrases in right and left headset earphones; while at the same time they had to decide whether or not simple math equations – presented over a loudspeaker, as a text message, or both – were correct.

“We discovered that messages presented over a loudspeaker in noise were more difficult to understand. But a visual cue directing attention and text messaging resulted in significant improvements in performance. Our findings suggest that the use of the visual system is a viable supplement for communication in cases of auditory overload or degraded listening,” Abel said.

Abel added that while the findings are particularly relevant for military operations, they may also prove useful for a range of civilian trades that involve processing auditory information from multiple sources, air traffic control, for example.